It's quite an unusual game. Not a pure RPG and not "only" an Action-Game. Let's call it Action-RPG. The story is quickly set up - your mission is to find the four keys from four continents to enter the Valley to get a moonstone and to bring it to Stonehenge at the correct moon phase. To do this you have to concentrate both on your very own skills at fighting other knights and weird creatures, as well es the skills of your alter ego in the game. The fights remind me very strong of the old game Barbarian (used to play that for hours on my old C64). But there's just more to the game. Once you get accustomed to the controls and are able to master the fighting-sequences you'll begin to have lots of fun. Tehehe... one of this stupid other knights got really angry coz' I always defeated him - seems to be programmed that he longs for revenge. He didn't get it.

Yet another Amiga hit that failed to dent the PC game market, Moonstone is an excellent RPG-flavored action game that puts you in the shoes of a medieval Knight in search of the Moonstones that will bring the Gods' gift that will aid in vanquishing the Great Dragon. In a nice twist from other RPGs, the various phases of the moon affect the creatures' strength and are key to the Moonstones' power. Journey to the five corners of England to fight monsters and opposing knights to gain treasure. MobyGames describes the game in more detail:

"Something's happening in these lands, and the only hope seems to be the moonstone. You, as a chosen knight from the druids are about to find it and bring it back. The game can be played from 1 to 4 players at once, with no difference between solo and multiplayer as no matter how many players play, the story stays the same for everyone. However, if you choose to play with only one player/knight, the other three will be the computer rivals. Wandering through the map, you can visit enchanted places, towns where you can buy equipment or try your luck in gambling, but mostly visited places on the map will be cabins which represents the places where certain enemy beasts are. Each spot has about two or more beasts which after defeating them can be rewarding in a certain way, depending on game's randomize placement.

Also, for example, if the place has three beasts and you kill two before you die, next time you (or some other player) go back there, there'll be only one beast left to fight. It's also possible for two players to run into each other and, once defeating the other, the one who prevails can steal the other player's money and/or weapons. Thus, searching for the moonstone begins, but that's only half of the story. The rest unfolds once you find it. " Overall, a fun, if difficult multi-vel hack & slash fantasy action fest.

You play a chosen Knight who has the find the moonstone to save the land. This game has some what unusual gameplay for an RPG game. You can't walk across the countryside, but has to walk across a map to different places. Those places are only one screen big. There you have to slay some monsters and find some stuff. In a town you can buy equipment or gamble. The game can be played up to 4 persons (turnbased). 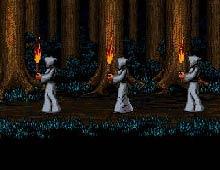 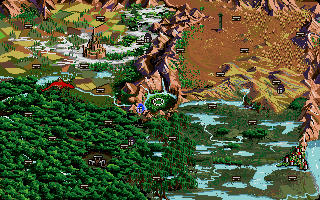 People who downloaded this game have also downloaded:
Betrayal At Krondor, Lord of the Rings 1: Fellowship of the Ring, Zelda Classic, Moonstone: A Hard Days Knight, Eye of The Beholder 1