Slightly reminiscent of the Shining Force series on Sega's Megadrive system, Monstania is an RPG with a turn-based combat system, which takes place on a 2D grid, rather than the usual select-target-and-attack system. This allows for some level of strategic planning in combat, rather than the usual, more reactive combat seen in most other RPGs. A likeable enough game, with a largely enjoyable, if not particularly original or deep plot, Monstania sees the male and female leads rescuing a young girl and attempting to evade her pursuers over a variety of combat areas while slowly learning more and more about the situation they have been thrust into. Stop me if you have heard this one before...

Unusually, all of the non-combat action in the game takes place in cutscene form. This keeps the game moving along at a fair pace, but will grate on the nerves of people who are used to a less linear style of RPG. Unfortunately, a decision was made to put speed and ease of gameplay over tactical depth, usually something I would appreciate, given the atrocious state of some games' interfaces, but in this case, the developers have taken it a bit too far. Rather than planning and executing each character's turns one after another, you are simply given control of one character, with the other following along behind you like the trailer of an articulated lorry. While you can switch between characters at will, and can leave one behind and move them separately, it's simply not possible to make both characters useful at once. This means that, where you would expect to have the melee character fighting close-up and the archer character attacking from range, well, quite simply, you can't. You can separate the two and locate them as if you were going to fight this way, don't get me wrong, but one of the characters just ends up sitting around, soaking up hits, while the other fights. While there are ways around this, and the game has been designed to compensate for it to a certain extent, it's a gaping hole in an otherwise admirable combat system that never manages to fully seal.

So, a likeable enough distraction which will certainly have its followers, Monstania will provide a few hours of uncomplicated gaming enjoyment for anyone who is not too fussy, but probably won't be making your all-time-greatest list. Originally released only in Japan with no English version, you can now play the game in English thanks to a fanmade translation patch made by AGTP which is included in this download. 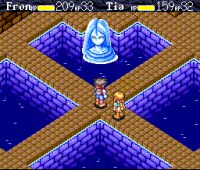