The game interface is rather simple to play as the keyboard commands are fairly easy to learn which makes the game much easier to play. The story in the game is ok, but not anything special. Too bad as it actually looks like the developers had focused more on game play that the "looks" of the game.

One of the best RPGs ever made, The Magic Candle is an incredible, highly underrated masterpiece that put Mindcraft on the map. Ater producing a few respectable RPGs for SSI (e.g. Rings of Zilfin), Ali Atabek's first release for his new company Mindcraft rivals Wizardry in addictiveness and sheer size. The Magic Candle boasts a very complex story, non-linear gameplay, and a huge game world to explore in addition to innumerable neat touches.

The plot revolves around you (Lukas) and your party of intrepid adventurers who have been tasked to seal the demon Dreax within the Magic Candle which was rapidly burning down. The game has 3 difficulty levels, toggled by changing the number of "days" you want to complete the game in (easy mode gives you 999 days, hard mode is less than 400 days).

The Magic Candle is a great example of an "epic RPG" in every sense of the word. The game has so many mini quests (hundreds, in fact) that it's impossible to do them all, so you will have to be selective and take copious notes lest you forget your main objective. Similar to Ultima IV, you will have to do a lot of talking to NPC's to glean information. What makes The Magic Candle a revolutionary RPG instead of merely a great game, though, is the abundance of nice little touches of realism. For example, when you are trecking through the moutains, the bird's eye view perspective will change a side view of your party standing at a washed-out bridge or ravine where you have to throw a rope to cross to the other side. Similar to Wasteland, The Magic Candle also implements a complex skill system, which is used to good effect to enhance realism and as solutions to many puzzles.

Among its numerous innovations, the most celebrated feature of the game is the ability to split up your four-member party at any time. Some puzzles (again similar to Wasteland) require you to be in different places at once, so you must split your party up. Different members can also do different things as time passes in real time. What this means is that you can leave some mages in a town rest and the rest can go off hunting. This is the kind of efficiency required to win the game.

Overall, The Magic Candle is a masterpiece RPG that will keep you engrossed for months. The only weak point about the game is the combat system, which is a little too simplistic, as well as the lack of on-line notebook to record immense amount of information). Still, the game offers a good balance of combat, puzzle-solving, and character interaction. A definite must-have for all RPG fans, and a much better game than its two sequels. 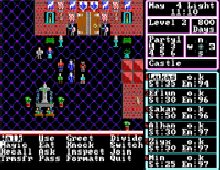 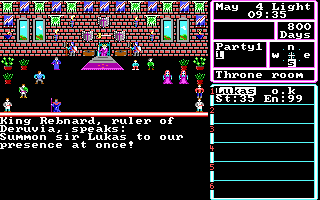 People who downloaded this game have also downloaded:
Magic Candle 2, The, Magic Candle 3, The, Lands of Lore: The Throne of Chaos, Bard's Tale 1, Ultima IV: Quest of The Avatar VGA