The Magic Candle 3 is yet another roleplay game. It doesn't offer any good graphics or sound, but only pure roleplay game all though it has improved a bit compared to volume 1 and 2. Like most other roleplay games you can create several characters to your party.

The game interface is rather simple to play as the keyboard commands are fairly easy to learn which makes the game much easier to play. The story in the game is ok, but not anything special. Of course you can transfer your characters from volume 2.

The last in The Magic Candle trilogy that begins with a bang and ends with a whimper, The Magic Candle III is the case of "more of the same" using a somewhat improved game engine over the previous games. The premise is an improvement over the plot in The Magic Candle II: your (same) band of intrepid adventurers this time must take on a destructive magical blight that is overrunning Terlermain and the castle and island of Oshcrun. Good King Rebnard is away fighting other battles, so you are left to protect Queen Alishia, Prince Jemil, and the kingdom.

Starting with only three volunteers in this episode, you'll quickly build your party up to six once action gets underway, and you will encounter dozens of volunteers. The interface works pretty much the same way as they did in the first two games of the series, although several additional features have been added to keep play interesting and for the most part lively. Weapons wear out and break. A semblance of normal life is experienced by the characters in that party members can be left in towns to earn a wage (to make the party some needed cash) by performing mundane work, train or practice skills at various training facilities located in the land and expand party awareness and abilities by exploring and finding old tombs and getting the resident spirits to shower your band with blessings.

As with previous games in the series, the game's emphasis isn't so much on character advancement as it is on "living the life" of characters on a mission. There is still plenty of obligatory combat, but they are not as frustrating or numerous as The Magic Candle II. Interaction with every character you meet, although important in the two previous games, has never been more so than in your quest to stamp out the blight. Of equal importance is the presence of four distinct libraries you must visit to receive clues and background on various topics. The way in which these libraries are interwoven into the story and the ultimate solution is one of the more enjoyable aspects of the game. 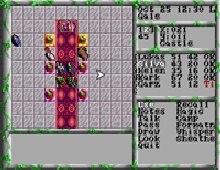 People who downloaded this game have also downloaded:
Magic Candle 2, The, Magic Candle, The, Lands of Lore: The Throne of Chaos, Knights of Legend, Lord of The Rings 2: Two Towers