The game interface is rather simple to play as the keyboard commands are fairly easy to learn which makes the game much easier to play. The story in the game is ok, but not anything special. Of course you can transfer your characters from volume 1.

An ambitious RPG that is a step backward from the classic predecessor, The Magic Candle II: The Four and Forty boasts improved graphics, steamlined interface, and a bigger gameworld without the play balance or fun nuances of the original. Many of the same characters introduced in The Magic Candle are still around this time, and the story centers around finding the forty-four mages that disappeared ten years earlier. Not as interesting as the premise in the original game, but enough to pique your interest....

So, what's new in this installment? For starters, there are only three major character types: ranger, bard or fighter available in both genders. Regardless of which you choose, they all have both modifiable fighting and magical ability. Mercenaries are available for hire but must be used cautiously because they will not return any traded items or share any of their acquisitions with you. Your party members can no longer be split into segments to accomplish actions. However, the game improves the concept by allowing you to send individual members to specific locations or training, fill the group vacancy temporarily with another volunteer, and then pick up the original members later. To make this new found capability even better, you can use a new gizmo called a "mindstone" to keep track of absent members' progress and issue other orders. You can also dismiss members outright and usually they'll return to their original location where you can possibly hire them again.

Teleportation is still an option to cross vast tracks of land, and the process has been cleaned up a bit from the original game. In a step forward in game development, the use of a notebook (customizable as to level of detail) has been introduced which automatically inscribes important events, conversations and a variety of other useful items. You can even rent-a-spell from various wizards, and the automap function has been greatly improved.

Despite all its enhancements, however, The Magic Candle II just isn't as fun to play as the original, mostly due to a less interesting plot and very difficult fights you will get into. Encounters with beasts and rogues is more difficult due to an increased level of "intelligence" of enemies. There are also many MORE of them... in fact, the probability of running into traps, ambushes and sticky situations is so high, saving often is necessary. What this means is that only RPG veterans who save very often will likely have the determination to finish the game. Add to that numerous bugs originally shipped with the game, and we have a disappointing sequel that could have been so much better. Die-hard fans of The Magic Candle will probably still like the game somewhat, but it is nowhere near as addictive or charming as the original. Arguably the weakest game in the trilogy, and one best played by hardcore RPGers only. 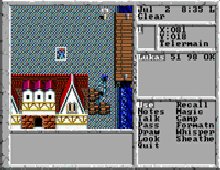 People who downloaded this game have also downloaded:
Magic Candle 3, The, Magic Candle, The, Lands of Lore: The Throne of Chaos, Knights of Legend, Neophyte: Koplio's Story