Light in The Darkness

Light in the Darkness is a fun action/RPG hybrid coded in Game Maker. The favorable review by tapeworm (maker of Seiklus) at Gamemakergames.com does a good job of explaining why both RPG and action genre fans should take a look at this game:

In this game, you take the role of a Lightbringer, a member of a group trained in armed combat and in magic. Only there's no longer a group--demons have killed all of the Lightbringers but you. You battle your way through a series of areas, each with its own theme. The usual environments are all accounted for (fire, ice, forest, and so on). Your game is saved each time you finish an area, and you can go through each area more than once.

One interesting feature of the game is the drag-and-drop inventory system, which reminds me of the Baldur's Gate PC games. You find things such as money, jewels, and potions to restore health and magic energy. Some of these items you find by exploring areas and some are dropped by monsters you've dispatched. I had a little trouble with the inventory at times--I found it easy to lose things in limbo when dragging them around. But if you're careful, this is not a show-stopper.

You become more powerful by buying new weapons, learning new spells, and using your experience points to upgrade abilities. You can do these things any time, but it's generally not a good idea to try to do them while enemies are after you--they don't wait patiently while you mess with your inventory as in many games. You may also want to plan your upgrades and purchases around the automatic saves that occur between areas.

Graphics throughout the game are clean and varied. There is a lot of detail in the environments, the enemies, and the actual interface (which, incidentally, looks as if this were planned to be a larger game). Sound effects are sparse but used well, and the music has good variety.

Things are pretty challenging at first. It takes a little time to figure out what to do and to get used to the controls. Depending on the weapons you buy, the spells you select, and whether you play through some of the earlier areas more than once, things can either remain difficult and somewhat slow or you can become powerful enough that most enemies no longer give you much of a problem. Ranged weapons help a lot.

Light in the Darkness has a lot going for it. Leveling up and gaining new items and abilities is well implemented, the bosses are fun, and you can probably get through the entire game in an hour or two. Definitely worth a try, in my opinion." 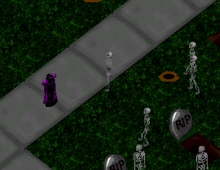 Light in The Darkness screenshot

People who downloaded this game have also downloaded:
Lord of the Rings 1: Fellowship of the Ring, Lord of The Rings 2: Two Towers, Neophyte: Koplio's Story, Neophyte: The Spirit Master, Lost Valley