Liberal Crime Squad is a fun little tongue-in-cheek "lite" Roguelike RPG game inspired by Oubliette, a 1983 Roguelike. You may not like the game very much if your political orientation is anything like the 'conservative' label, though. The game's premise explains why: "welcome to Liberal Crime Squad! The Conservatives have taken the Executive, Legislative, and Judicial branches of government. Over time, the Liberal laws of this nation will erode and turn the country into a BACKWOODS YET CORPORATE NIGHTMARE. To prevent this from happening, the Liberal Crime Squad was established. The mood of the country is shifting, and we need to turn things around. Go out on the streets and indoctrinate Conservative automatons. That is, let them see their True Liberal Nature. Then arm them and send them forth to Stop Evil. Eventually the public will fall behind us, and we will put more Elite Liberals in government."

Umm, okay, I'm sure a lot of you are thinking ;) Given this wacky and far-fetched scenario, Bay Twelve Games deserves kudos for designing gameplay mechanics that actually put this premise in practice. You are placed in control of the "Liberty Crime Squad," and the first thing you need to do is create/recruit agents. The agent creation process is fun: you answer a number of multiple-choice questions that are similar to Ultima VI - except of course for their modern content - to determine your agents' RPG-like statistics such as health, intelligence, strength, wisdom, as well as skills such as computers and assault rifles. After your squad is filled up, you then get to send your agents off to -err- wreck havoc on the conservatives' agenda by sending them to raid conservatives' strongholds, bringing back news items that expose the conservatives' evil agenda from those locations and publishing them to change the public's opinion in your favor. Crimes that you commit at a site will help the media build up a sensational image around you, and this will help bolster public opinion. However, if you alienate a site, the spin on the story will be negative, and opinion will shift against you. You must check public opinion once you get back to see how the battle changes it. You win the game once all of the laws turn "Elite Liberal," which requires both Houses of Congress, the Supreme Court, as well as the Executive Branch to turn Elite Liberal. You do this by fighting conservatives, freeing the "oppressed" from their clutches, and ultimately change public opinion.

There are many nice touches in the game that makes it more fun, and make good use of the unique subject matter. For example, attacking a Conservative in the presence of a Moderate will alienate the masses. You can arm your squad with many kinds of weapons, kidnap hostages, and even convince people to join your agenda with lengthy expositions. Although it is a "pure text" game (i.e. ASCII graphics), the interface is well-designed and intuitive - anyone who has played Oubliette in particular will feel right at home. Overall, despite a wacky premise and somewhat random design that makes it feel more like a strategy game at times than an RPG, Liberal Crime Squad is a fun and unique game that will entertain both Roguelike fans and liberals alike ;) Highly recommended! 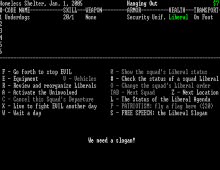 People who downloaded this game have also downloaded:
Legacy of The Ancients, Legends of Murder, Sundog: Frozen Legacy, Ultima IV: Quest of The Avatar VGA, Lord of the Rings 1: Fellowship of the Ring