Arguably the best Atari ST game ever made, Sundog: Frozen Legacy is also one of the best sci-fi RPGs ever, period. It isn't a strategy game, or a space combat game, or a role playing game, but a masterful blend of all three genres into an addictive, astounding epic that will take you months to complete (it took me a few solid weeks, even with walkthrough in hand).

The game's premise is somewhat cliche, but reasonable: you are a former (galactic) slave who just inherited your uncle's starship, along with a contract that your uncle was working on, which is to supply a colony with the materials and equipment it needs to grow. You must pilot the ship, the Sundog, to the various planets within this area of space and acquire the goods through buying and selling or other means, and deliver them to the colony when they are requested. Naturally, as you nonchalantly work on the contract, you will soon be involved in a bigger, more sinister plot that has the fate of the entire universe hang in the balance.

What makes Sundog a true classic as opposed to merely a good RPG is neither the brilliant plot development, or the excellent game mechanics, although it has plenty of both: it is the astounding level of detail. The detail in Sundog is staggering, and truly attests to this being a labor of love: the gameworld is fully realized at every level, from outer space to planetside where you can disembark from your ship into an armored car, and even out of the armored car into the streets. Each level of details is full of things you can interact with, from other ships in outerspace view, down to people inside various buildings at ground-base level.

Overall, there's really no fault I can find with Sundog, except that some ship-to-ship combat sequences toward the end are a bit too difficult, and there are not as many clues as I would like. Still, it is a masterpiece in every respect, and arguably a better game than FTL's better-known classic Dungeon Master that was made a few years later. If you are looking for a reason to install an Atari ST simulator, this is it. 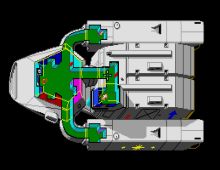