The summoning is an older SSI offering. The most surprising thing about the Summoning is the really huge amount of game play. There is more play in one set summoning levels then in the entire Menzoberranzan. A brief outline of the plot sees you having to enter the domain ruled over by the evil Shadow Weaver. Yet within the corridors of this domain are lots of creatures and characters.

Your task is to make your way through the levels, fight off the creatures, guards and other nastiness, find and confront Shadow Weaver. There are several essential stages you have to complete to progress. One such is finding several wizards skulls, these skulls will each teach you part of a spell needed to teleport to another world and retrieve one half of the staff of summoning. Shadow Weaver has the other half and you don't have to be Einstein to work out what you have to do.

There is at least 30 levels in the game, which is amazing for a game like this one. The levels are grouped into larger sets, for example 3 beginner's levels, 5 knight's levels, etc. Each set of levels has its own unique puzzles that need to solved before entering a new set. The graphics are an overhead view, SSI calls it 3D, but its not, its the similar sort of view as Origin's Black Gate or Pagan, but naturally the graphics are very much simpler.

A nifty idea that has not been used in any SSI game since is that the character stats and inventory are on a sliding window that you can click and drag up or down at will. Music and sound wise its a very poor show, a few creature noises would not of went astray, but all is silent, except for your characters footsteps. Combat is real time and fills up much of the gameplay.

The Summoningis one of Event Horizon's best games and among the most neglected RPGs ever. Excellent VGA graphics in 3D isometric view (similar to the later Ultimas), great spellcasting system, devious puzzles & traps (although most are of the "find-a-key-to-unlock-this-door" and "step-on-the-right-pressure-plate" variety). This is *not* for hardcore RPGers, as it uses only the most basic statistics, and has a strong action-oriented combat. Still, it's one of the best RPGs that deserve to be on every RPGer's shelf. 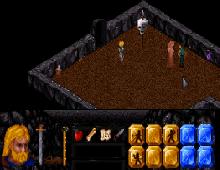 People who downloaded this game have also downloaded:
Pool of Radiance, Lands of Lore: The Throne of Chaos, Pools of Darkness, Treasures of the Savage Frontier, Secret of the Silver Blades