Legends of Murder is a fun fantasy RPG/murder mystery game designed by Jamie (later James) Schmalz, who would years later be famous as one of Unreal designers. Similar to MicroProse's The Legacy, the game combines RPG and adventure elements into an engrossing game, even if the graphics are primitive. The storyline and basic gameplay are as follows:

"As the Inspector, you have been summoned to a small castle near the harbor city of Erdwyn to investigate the murder of the King. This castle -- the site of the murder -- is a day's journey across the Northern Sea from your own kingdom. Hired by the advisor of the deceased King, an elf named Ash, you set foot in the castle after a long journey across the sea, and the game begins...

Your ultimate purpose in Legends of Murder is to discover the murderer of the King. There are numerous riddles and puzzles to solve along the way, as well as many people to meet and places to explore. It is very important that you talk to everyone you encounter, search all rooms of the castle you enter, and make note of what you learn for later reference."

With an excellent blend of elements from both RPG (character statistics, casting spells, gaining levels) and adventure (puzzle solving, exploration) genres, Legends of Murder is one of the more memorable releases on SoftDisk's "Big Blue Disk" monthly. The writing is also above-average, and the game is quite atmospheric. One notable anecdote is that the game was programmed entirely in Assembly language (!). The only complaint I have is that the game is a tad too short, and the character a tad too small. Other than that, you'll probably enjoy this old game if you like RPG hybrids that place more emphasis on gameplay than graphics. 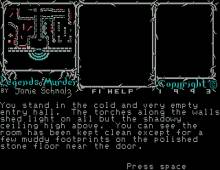 People who downloaded this game have also downloaded:
Personal Nightmare, Neophyte: Koplio's Story, Treasure Hunter G, Legacy of The Ancients, Lord of the Rings 1: Fellowship of the Ring