Legend of Valour is yet another roleplay game from Strategic Simulation Inc. The game engine is a mix between the regular old classic games like Champions of Krynn and Curse of the Azure Bonds (not the actual interface) and the Eye of the Beholder series (or Ultima Underworld if you prefer that).

While the actual game looks nice with a somewhat smooth interface and easy controls the game lacks a good story that was normally SSI's strength when they made roleplay games in the 80's and 90's. And when you add up several bugs in the game, a quite bad combat engine and poor interaction with the different people you meet Legend of Valour can turn most people off from playing the game in the future.

If you give the game a chance and you are a roleplay fan and maybe even a fan of SSI you might find this a good game but compared to so many other roleplay games it's simply not worth it. But if you have completed all the other games you have just give this game a shot. You never know whether you might find it addicting and after all it is a roleplay game, which is my preferred genre.

Legend of Valour is a novel experiment in 3D RPG by SSI that was billed as "better than Ultima Underworld." Unfortunately, the game not only falls far short of its lofty claim, but is also a rushed RPG that's riddled with bugs. The gameplay is very imbalanced: success in fights seems to depend only on how fast you can click, and the perpetual thirst and hunger you must deal with is infuriating. Pixellated NPCs, lackluster plot, and irresponsive interface add up to a game that's best played as a lesson in how NOT to design an RPG. You have been warned ;) 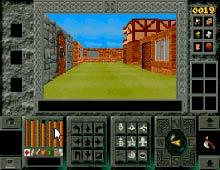 People who downloaded this game have also downloaded:
Lands of Lore: The Throne of Chaos, Knights of Legend, Shadowcaster, Light in The Darkness, Worlds of Ultima: Savage Empire