Legend of the Silver Talisman

Legend of the Silver Talisman is a fun action/RPG hybrid from Inter-Active Arts. The game is similar to coin-op classic Gauntlet, except with many more weapons, monsters, and levels. Your ultimate goal - the objective of the third episode - is to get the legendary Silver Talisman back from the evil wizards who have stolen it, but you can play any of the three episodes out of order if you want to, before embarking on the final journey to the Mystic Realms.

The game looks strongly reminiscent of Ultima VI, with colorful and attractive tile-based VGA graphics. The gameplay is straightforward: you control your hero from the top-down perspective as he moves around the worlds, attacking monsters in real-time, or running away from them as the case may be. You can speed up or slow down the game clock, collect and use potions, cast spells, equip magical weapons, and do all the things a typical RPG allows. What makes LTST unique, however, is the split-screen 2-player mode that lets you play with another player at all times (the second player could be either computer- or human-controlled). Both players can meet up in the area and fight one another, if you are not in the mood to co-operate. You can even steal from the second player if you are careful enough. This makes LTST a lot like Gauntlet, but with more traditional RPG trappings and much bigger areas to explore.

Formerly a shareware title, the game has recently been released as freeware by its designer. With a fun blend of action and RPG, Legend of the Silver Talisman should appeal to fans of both genre who are looking for a "light" game, especially one designed with multiplayer in mind. 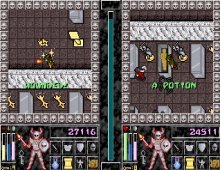 Legend of the Silver Talisman screenshot

People who downloaded this game have also downloaded:
Knights of Legend, Light in The Darkness, Neophyte: Koplio's Story, Betrayal At Krondor, Lands of Lore: The Throne of Chaos