Most likely the rarest Roguelike game in existence, JauntTrooper - Mission: Thunderbolt is not only a great Roguelike RPG, but also one of the few sci-fi Roguelikes designed on the Macintosh - making it even more special. The plot is cliche, but it's not bad in the context of the game. The game is very rare because this PC version was sold only by mailorder; the developer MagaCorp failed to find a willing publisher after the commercial failure of the Macintosh original. This was the only game in the planned 4-game series that made it out for the PC; the second game called Mission: Firestorm was released for the Macintosh and sold only very briefly.

In this game, you play a rebel freedom fighter who must find a working prototype of an Anti-Matter Bomb, which can be used to dispel the aliens that have conquered the post-nuclear-war Earth. As with other Roguelikes, you control the fighter from the bird's eye view as he moves around the vast gameworld, fighting hostile animals and aliens in his path. JMT boasts crisp VGA graphics and sounds, something that will please Roguelike fans even though they are certainly not "must have" ingredients for this genre (after all, ADOM and NetHack have captivated scores of gamers with only ASCII 'graphics').

So how does JMT fare in the gameplay department - the most important in all Roguelike games? Roguelike fans will be pleasantly surprised with the true freedom the game gives you, as well as the wonderfully expansive command list and truly interactive environment. Need a door where there isn't one? Bash a hole in the wall. Can't find the stairs to the next level? Cut a hole in the floor. While you are exploring the high-tech bunker, monsters will move about, attack each other, and track you down. There is an impressive variety of high-tech devices in the game, hidden areas, and a huge range of inventory items. If you enjoy Roguelike games or just sci-fi RPGs in general, Mission: Thunderbolt is one of the best there is. 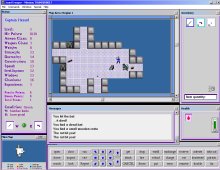