Mission: Firestorm is the first and only sequel to Mission: Thunderbolt, probably the most underrated commercial Roguelike RPG ever made. Released only for the Macintosh, Firestorm is a sci-fi Roguelike that is has even more depth than Thunderbolt. While the plot does not differ much from the typical sci-fi cliche we are all used to, the beauty of Firestorm lies in a huge gameworld and a staggering number of options. Almost every problem you encounter can be solved in more than one way, and there are hundreds of monsters to kill, high-tech gadgets to use, and dozens of skills to improve. You can import your Thunderbolt party to this game, or create a brand new team of 6 commandos to explore the world.

Firestorm is as wide-open and complex as Thunderbolt - with even more options, a bigger world, and nicer sound effects. There are so many possibilities in the game that no two games will ever be alike. Improvisation and creativity are keys to your success. If you like Roguelikes, you will definitely enjoy Firestorm. If you have never played a Mac game before, here is a perfectly good reason to install Basilisk II emulator (just click on the "Macintosh" link in our System Requirements section below to find everything you need). This is a highly underrated sci-fi Roguelike that will keep all fans of the genre happy for months to come. Highly recommended! 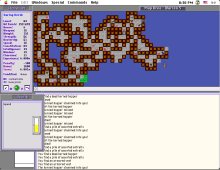