Hard Nova is an overlooked epic sci-fi RPG that is a follow-up of sorts to the excellent Sentinel Worlds. Every aspect of the game is a vast improvement over its predecessor, the most important one being even more freedom: you are no longer a Federation officer but a free-wheeling mercenary (either male or female) who takes on increasingly difficult missions for fun and profit.

The wide variety of gameplay styles that made Sentinel Worlds a classic is even more distinctive in Hard Nova: the moving dots that represent NPCs in the overhead exploration view of Sentinel Worlds has been replaced with distinct characters (although they still look somewhat like bigger dots), each with his or her own portrait that pops up with you strike a conversation. The static topological map of planets (from which you select landing site) is gone: you now pilot your spacecraft over a planet's surface from a neat isometric 3D view, which requires you to pay attention to obstacles such as tall mountains, as well as collision with other ships.

While Hard Nova retains all the strengths of its predecessor and features numerous improvements, it also unfortunately retains most weaknesses, some of which are amplified. The worst offender of these is the fact that you cannot dismiss a character that you added to your party. In Sentinel Worlds, this limitation made sense, as you were commanding a crew of loyal space police. In Hard Nova, however, you hire fellow mercenaries to the team, only to find out later that they really exist to help you in one mission and have little use otherwise. Since you cannot dismiss anyone, this means that you must decide carefully on what characters are to be developed in which skills. Fortunately, all characters can gain experience points in many ways, especially in ground missions, so that eventually even the most inept party member can prove indispensable in the later stages of the game.

With interesting varieties of gameplay, colorful characters, and interesting missions and items to find and use, Hard Nova is in many ways a better game than the already excellent Sentinel Worlds. A must-play for all sci-fi fans! 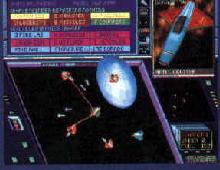 People who downloaded this game have also downloaded:
Sentinel Worlds, Lands of Lore: The Throne of Chaos, Knights of Legend, Star Command, Wasteland