Sentinel Worlds is one of the few roleplay games taking place in a sci-fi world. Let me start by telling that Sentinel Worlds is not just an easy and simple game - you will both meet many hard challenges in the game and also find out that the story in the game is well written and quite long. When you add all on the "non-story" events in the game as well you have a fairly large game that offers tons of gameplay.

Your job is to command a crew of 5 Federation officers in a quest for raiders that are around in the Caldorre System. You do this by fighting them and find their base. Once this is done you have to destroy it before your quest is completed. What I really like about Sentinel Worlds is that you can always stop following the main plot in the game and instead play some of the other events in the game and always get back to the main plot if you want to. I always like when a thing like this is possible in a game and first really enjoyed it in a game like Daggerfall.

While Sentinel is a roleplay game it features sequences that will be enjoyed by both adventure and action game fans. Especially the story will be a good attraction for adventure fans even if they are not fans of roleplay games in general. A thing like conversation with other people is included as well and with the decent graphics Sentinel Worlds is a recommended sci-fi roleplay game. It wouldn't hurt with more games in this genre.

One of my most favorite sci-fi RPGs ever, Sentinel Worlds is one of the very best "hard" sci-fi games ever made, despite disappointing sales figures. Your task as is to command a crew of 5 Federation officers as they embark on an epic quest to combat raiders that are plaguing the Caldorre System in the far-future year of 2995, learn where the raiders' base is, and terminate the problem once and for all.

There are many bold innovations that set Sentinel Worlds apart from other RPGs. For one thing, the game is very non linear: you can ignore the central plot (i.e. solving the raiders mystery) for as long as you want-- there are many random dogfights with raiders ships you will encounter in space, each of which require manual dexterity as well as strategic planning (e.g. you can coordinate attacks with other Federation Interceptors in range). Engaging in these action-based fights is a lot of fun, and is a good way to boost your crew members' combat-oriented skills. You can also make a living by harvesting valuable minerals on a planet's surface, and selling them at planets where demand is high. Earned income can be used in various ways, from buying better equipment for your ship, as well as more powerful weapons and gadgets for your crew members.

Once you decide to get knee-deep in the game's plot, you will find a complex, well-written story that involves many subquests (some of which are optional), plot branches, and colorful characters. The conversation system is particularly notable: when you converse with another character, you must often select a response from a number of multiple choices. Each response you choose will affect that character's attitude and future response towards you, and the "optimal" response is not always obvious. This makes the game frustrating at times when you have to resort to an earlier save game if you have selected a conversation choice earlier that prevents you from finishing the game. Worse still, the game only allows 2 save game slots, which makes manual backup almost unavoidable (I remember backing up my saved games to about a few dozen files, just in case).

Despite this flaw, Sentinel Worlds is so well-written, gripping, and *teeming* with characters going about their business in real time, that you'll gleefully forgive the game and plunge headlong into its many intricacies. The game's well-written plot will appeal to adventure gamers who don't normally play RPGs, while RPGers will find much to like about its skill-based character development and a myriad of high-tech items to use. Don't miss this one folks, and be sure to try the sequel Hard Nova which is even better :) 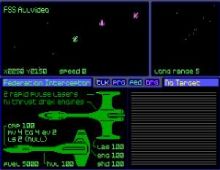