The fourth game by Synergistic traces the adventures of well-known comic book hero Conan from his humble beginnings as a blacksmith. The World Builder engine, which has remained more or less the same for the previous 3 games, got a facelift in this game: the interface is more transparent, and the game world is now 3-D and much larger. Strategic elements, however, disappeared in favor of more adventure and RPG elements (e.g. more items and conversation choices). The result is a strong RPG that is not as genre-busting as its predecessors due to its heavy emphasis on combat sequences. 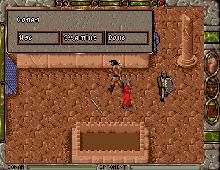 People who downloaded this game have also downloaded:
Blood Omen: Legacy of Kain, Lord of The Rings 2: Two Towers, Lord of the Rings 1: Fellowship of the Ring, Betrayal At Krondor, Eye of The Beholder 1