Caverns of Xaskazien is a neat Windows remake (based on SDL) of an obscure but fun DOS Roguelike of the same name written by Jeff Sinasac as a shareware title. The original DOS game is a fun turn-based, tiled Roguelike that offers a decent gameplay and big bright icon graphics, although it has nothing that will pull anyone away from ADOM or NetHack in the longer-term ;) I like the subtle humor in the game, though, which is mostly in the form of funny or quaint names for monsters and special items. This Windows port has been improved by the original designer who added even more monsters, maps, and better gameplay - the dead monsters now stay dead on the tile you kill them on. All in all, a neat little Roguelike that unfortunately does not stand the test of time too well, and is more of a five-minute diversion for fans of "lite" Roguelikes than anything else. Both the DOS version and Windows remake are now freeware. 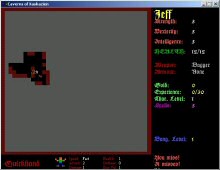 People who downloaded this game have also downloaded:
Knights of Legend, Castle of the Winds, Bard's Tale 1, Aleshar: World of Ice, Lord of The Rings 2: Two Towers