Castle of the Winds

Castle of the Winds is a fun graphical Roguelike RPG designed by Rick Saada and published as shareware by Epic-Megagames. The game contains 2 episodes: the first was titled "A Question of Vengeance" and is distributed as shareware. The second is "Lifthransir's Bane" and had a $25 registration price tag. The game is played from a top-down perspective, and like other Roguelike games, it has one huge dungeon with 25 levels deep. Your goal in the first episode is to retrieve an an ancient helm to rightfully claim the throne that is your birthright. Barring your path is the powerful demon lord Surtur.

The gameplay is the same as other Roguelikes. You explore dungeons, evade or disarm traps, defeat monsters, and find treasures and powerful magical items will help you against the demon. The graphics in the game is somewhat cheesy, but passable for a Roguelike. The actually gameplay is deep and involving. There are hundreds of spells and weapons to use, and plenty of monsters to slay. Although it is far from the level of complexity in NetHack or ADOM, Castle of the Winds is fun, intuitive, and easy to get into. If you enjoy Roguelikes, you will like this "lite" shareware game that has recently been released into the public domain by its author. Highly recommended! 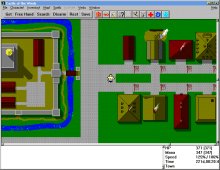 Castle of the Winds screenshot