One of the oldest Roguelike RPGs in existence, Beneath Apple Manor is a very rare IBM version of the Apple II game of the same name which was designed by Don Worth and published by Quality Software way back in 1980. This IBM version was released in 1983, and has now been released into the public domain - thanks to Don Worth himself who was kind enough to send us the original game on 5.25" floppy for us to crack, and put on this site - as well as his homepage ;-)

Although it doesn't stand the test of time as well as some other Roguelike classics (most similarly Sword of Fargoal), Beneath Apple Manor is still as much fun today as it was in 1983 - and definitely more fun than Avalon Hill's slightly older and better known Telengard. As an intrepid hero, you goal is to descend as deep as you can into the dungeon to retrieve the genuine golden apple (there is a fake one in the game that will instantly kill you). You have four stats: strength, intelligence, hit points, and gold. There are 3 types of armor and several weapons you can wield. You could also use the "Zap" spell, as well as magic items. You will battle ghosts, trolls, slimes, dragons, and a few more monsters.

For a 1983 game coded entirely in BASIC, Beneath Apple Manor offers many innovations that wouldn't be seen for many years hence. For example, you could define the number of rooms you want to play, and the dungeon is randomly generated so you won't play the same game twice. The difficulty level of the game changes dynamically to suit your current stats, and you can buy equipment and save games in between levels. Although you could be resurrected with the same stats when you die, your saved game deteriorates each time, so this naturally discourages you to use the "save-and-restore" cheat too much ;-)

Although Beneath Apple Manor is simpler than Rogue, it is still a very fun game that remains playable to this day. Considering that it ran in 16K and was written in BASIC, the game's ability to generate random dungeons and dynamic difficulty level is nothing short of a programming marvel. If you like Roguelikes, check out one of the oldest - and rarest - pioneers in the genre. 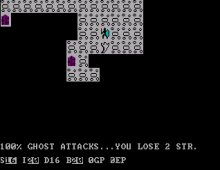