This is yet another Commodore 64 classic that failed to attract a following among PC crowd. An immensely detailed RPG (with various weather effects!) on an epic scale, Alternate Reality, like Might and Magic, integrate science and fantasy in its plot and gameplay. A very nice-looking 3D RPG with almost an unlimited number of realistic choices (i.e. you can get a job, practice skills, etc.) . I just wish I can control more than one character. Definitely one of the most replayable RPGs ever made, and a must-have for every RPG veteran.

Note: Alternate Reality was designed and coded by Phillip Price, who has given approval for redistribution of this game. This was not a C64 game per se, but was coded directly for the Atari 800 series computers, then ported to other platforms such as C64 and IBM and Atari ST. Phillip used Atari's Display List Interrupt capability extensively, getting an unheard-of 256 colors onscreen in high-res mode. This color feature was undoubtably lost on the C64 and IBM. The best news to fans is that he's working hard on a remake of this classic :) 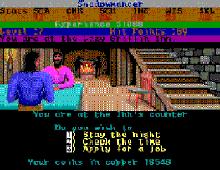