A superior sequel to Countdown to Doomsday, Buck Rogers: Maxtrix Cubed is the second and last game in the promising series of RPGs based on the Buck Rogers comic book universe. As with its predecessor, you are thrust into the twenty-fifth century, a world of political intrigue, epic struggle, and mind-boggling scientific advances. Earth has been ravaged by centuries of exploitation at the hands of the Russo-American Mercantile (RAM), a mega-corporation fueled by the planet's resources. Although the New Earth Organization (NEO) - headed by Buck Rogers, and the group to whom your loyalties belong - has managed to regain control of Earth (as recounted in Countdown to Doomsday), RAM's bases on Mars and throughout the Asteroid Belt remain powerful.

As the game begins, your party of rugged adventurers is on a space station orbiting Mercury, sentby Colonel Rogers to seek the allegiance of the new Mercurian Sun King. While there, you meet a scientist who tells you of his theory to create a Matrix Device. The device will transform any matter into whatever new form is desired - just the thing to repair the scarred Earth. But before you can take the scientist to NEO's Salvation Base to meet with Buck Rogers, he's kidnapped by a new terrorist organization, PURGE, dedicated to the Prevention of Unwanted Research and Genetic Engineering. The group seeks to destroy all genetically engineered lifeforms, or Gennies, created to aid in the colonization of the other planets. PURGE fights to reclaim the solar system for pure Humans. But many Gennie groups, such as the Martian Desert Runners and Venusian Lowlanders, are now peaceful and fully realized cultures. Indeed, Gennies are a vital part of the NEO organization. And so you must race to assemble a Matrix Device for NEO, while keeping the technology out of PURGE's hands.

The plot this time around is even more intriguing than Countdown to Doomsday and involves a much more intricate web of sub-plots and characters. As for gameplay, anyone who's played the Gold Box series of TSR/SSI games will immediately recognize the Matrix Cubed gaming system. It's simple and straightforward, providing easy access to the game's role-playing mechanics. SSI also definitely listened to fans' comments, as many of the complaints for Countdown to Doomsday have been addressed: there are now fewer combat sequences and more NPC interaction, and more weapons and gadgets to find and use. Although not as graphically pleasing as contemporary RPGs, Matrix Cubed is great fun. Effort was spent on making the story and engine top-notch, and it shows. As a result, what it lacks in glitz it more than makes up for in substance. Matrix Cubed is simply a must-play for all RPG fans, and a pleasant change of pace for Gold Box AD&D veterans. 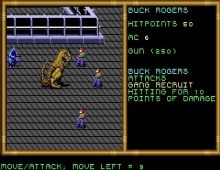 People who downloaded this game have also downloaded:
Buck Rogers: Countdown to Doomsday, Curse of the Azure Bonds, Pools of Darkness, Pool of Radiance, Champions of Krynn