An excellent "hard" sci-fi game from the creator of legendary Bard's Tale, Centauri Alliance unfortunately remains relatively unknown-- in sharp contrast to that classic series. Calling the game "Bard's Tale in space" is not unaccurate, since Centauri Alliance is also a first-person, multi-character real-time RPG, and designer Michael Cranford evidently put as much effort and love into the game as his best-known creations. The result is a thoroughly captivating space RPG with a lot of polish and innovations that deserve to be on every gamer's shelf.

There are many great things about the game, but let's start with one of the more mundane aspects: the plot. It is the 23rd century, and the galaxy is at war, divided into dozens of alliances. The Centauri Alliance was formed between humans and 5 alien races as a rebellion force that strive to bring about a peaceful coexistence among all the races. As a member of this rebellion, your job is to assemble a team of adventurers chosen from this coalition, locate a dangerous renegade in the Omicron VII and "neutralize him at any cost."

Sounds like your typical day-time sci-fi channel flick? It is. But it's the gameplay that counts-- and Centauri Alliance has it in spades. At the beginning, you can choose members of your adventuring party from a pool of applicants, or transfer existing characters from the Bard's Tale series, or even Ultima and Might and Magic games! Centauri Alliance intelligently alters or drops fantasy items and spells that would be out of place in its sci-fi gameworld, and makes appropriate adjustments. If one of your Bard's Tale characters is a wizard, he will be in for a big surprise :) (Hint: magic does work, to a certain extent). This wonderful linkage with other RPGs is a great innovation that should have been emulated by latter-day RPGs, but sadly the game was too unknown to affect that change.

Once you finish assembling the adventuring party, the plot thickens as soon as you begin space exploration outside Lunabase, and never lets up. I can wax nostalgic for pages on end for outstanding gameplay features, so here is a small sample: the hex-based, turn-based combat interface that emphasizes tactical planning, excellent overhead automap that you can even move in, creative psionics abilities (the equivalent of "spells" in fantasy RPGs), skill-based puzzles similar to Wasteland.... the list goes on. Suffice to say that if you are a fan of sci-fi RPG, Centauri Alliance is a must-have. With a well-written plot and character interactions, huge worlds to explore, and a number of innovations, Michael Cranford has created an undiscovered masterpiece. 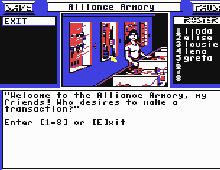