Amulets and Armor is an excellent RPG that suffered the same fate as Wizards & Warriors: a game that has been in development far too long that it fell out of the technology curve when released. Similar to D.W. Bradley's ill-fated masterpiece, Amulets & Armor boasts many innovative features that would have been called "groundbreaking" if released just a few years earlier. Your quest: defeat 'big foozle' Exiguus the Necromancer deep in the catacombs below Castle Arius.

With a first-person perspective and somewhat pixellated VGA graphics, the game looks and feels similar to Bethesda's classic Daggerfall, but with a whole new angle: co-operative multiplayer gameplay. You can work alone, or as a team with up to 4 human players over your local IPX network or modem. With a large fantasy campaign that spans over 30 levels, 3 different runic spellcasting disciplines, 11 different character classes, and more than one hundred unique items, Amulets & Armor will immerse you for hours on end—especially if you play with friends in co-op mode. Death-match play -probably the first in an RPG—is also available if you enjoy working against friends more than with them ;)

With an excellent spellcasting system, intuitive interface, and innovative multiplayer options, Amulets & Armor ranks among one of the most obscure and underrated RPGs of all time, and it was a shame that the game was never marketed properly: it was released only as shareware, and sold less than 100 copies during its time according to this very interesting article at TheCan.org written by one of the designers. 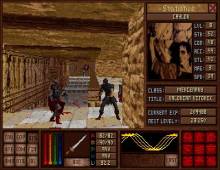 People who downloaded this game have also downloaded:
Betrayal At Krondor, Anvil Of Dawn, Bard's Tale 1, Lands of Lore: The Throne of Chaos, Albion