Clone is a fun but very little known shareware puzzle game from Antares, published by LaserPoint Software in 1997. Since LaserPoint no longer existed, the full registered version is being distributed as freeware from the author's website. As the official blurb says, "...in Clone, you control a little blue hero who will sometimes multiply into many other clones that you will also have to control. Sure you've already played puzzle games with many characters to control, but you sure haven't had to control all of them at the same time!!! Luckily, clones tend to be copycats. If you move one of them, they all will try to move in the same direction. The little blue hero moves around the screen gathering objects and solving puzzles so he can go to the next level. Many of the puzzles take teamwork, so be sure to keep a close watch on all of your clones."

The game plays like a fun and a little less maddening cross between Chip's Challenge and Lemmings. The long line of clones that must go everywhere together makes your job more difficult than necessary in most levels, although sometimes it is also crucial. The huge variety of puzzle elements makes the game challenging and addictive. There are different colored potions you can drink to protect your clones against acid and other hazardous material, keys to unlock doors, buttons and levers, bombs, shields, various magical items, and hint scrolls. You can even ride various vehicles on some levels, such as mine cars to travel on rails and rafts to cross rivers. As if that's not enough, you also have to deal with different types of enemies, ranging from dumb boars to dragons, living sparks, devils and ghosts. If you enjoy creative and devilish turn-based puzzle games that never seem to run out of surprises, Clone is a game for you. With 6 huge worlds and a near endless variety of levels, it is definitely one of the best shareware puzzlers ever made. 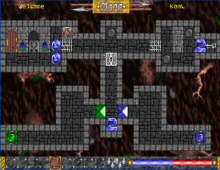