Atomic is a faithful remake of Thalion's classic Atomix. The gameplay and levels are identical - just cosmetically upgraded with SVGA graphics and a Windows interface. If you have never played Atomix before, the idea is simple: move different atoms around the screen to create the required molecule. For example, in the first level you must move 2 Hydrogen atoms and an Oxygen atom and connect them in the right order to create water molecule. The trick is that each atom will not stop moving until they hit a wall, other atoms, or other obstacles. You must also plan all your moves ahead lest all the atoms get stuck in the corners, forcing you to restart. If you enjoy the Thalion original or just devious brainteasers in general, Atomic will keep you occupied for many hours. Too bad the designer did not add any new levels to make the classic even better, but at least the game is open source, so any programmer who is so inclined can extend the game can do so him/herself. Recommended! 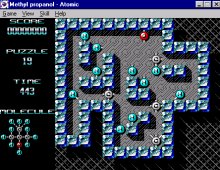