An innovative 3D version of the classic Lemmings, 3D Lemmings took the great gameplay of its forerunner to a whole new level. The concept is still the same-- assign foolish lemmings various roles as diggers, blockers etc. to lead the tribe to safety-- but now you can do it all in true 3D, observing the action from any angle. Controls are confusing, but you can use the practice mode to learn the ropes. Good "auto-replay" function rounds off this old game :)

3d lemmings is a 3d version of the classic which goes by the same name, minus the 3d. You have the same role as on previous lemmings games, you have to same as many of the creatures as possible before either time runs out, or most commonly the amount of lemmings to save runs out.

This game lives to its name and is in true 3d, with different camera angles which you can set yourself, zooming in to see individual lemmings, or zooming out and around to see the whole show. The graphics on this game are awesome for its age, and in comparison to its various predecessors, also it as a nice musical score to top things off.

I love this game and was hooked on it right now, in fact I'm laying in bed writing this review on my old 486 laptop wanting to desperately go down stairs to play it again, heh, better not though, I think my dad will kick my ass if he finds me on the computer until 7am again!

The good points about this game are that if you've played any previous versions of lemmings you'll know exactly what to do, and will love the new visuals and effects, and even of you haven't heard of the game lemmings before, you will pick it up easy as abc.

The game is about 9mb compressed, but take note it will decompress to a much larger 45mb or so!! Make sure you have enough room if your running an old pc, as I know how easily hard drives can fill up with games, heh, right now my drives are giving me 'clean up' prompts every 10 minutes.

This game is great for any age group and everyone will enjoy it, so don't miss out!

A 3D version of Lemmings. What else is there to say? Who hasn't played a little bit of or at least know what Lemmings is about? But just in case that's you, then lemmings are a bunch of cute helpless creatures that start of at one end of the level and need your help coordinating a means to get them over to the other side. For a more detailed description - perhaps you should check out reviews of the original Lemmings game.

As for this game, it's not so bad. Even though it was a matter of Psygnosis jumping on the 3D bandwagon, and reinventing the same game with an added dimension. How well that worked is debatable, but the general consensus is probably that this game isn't quite as good as it's many far simpler predecessors.

It's not that 3D doesn't bring a few new elements and (sometimes interesting) complexity to the game. The game does play slightly differently because your Lemmings can turn in different directions now and it's slighlty harder to keep track of them without changing camera views from time to time. I guess the real question is... Does more complexity necessarily add to playability of the game?

Overall, this is still a lot better than many other games and it's fun enough to play. In addition you'll see a lot of your old cute green haired budies: such as Blocker, Bomber, Basher and Builder... but there are one or two extra things that your lemmings can now do. You might want to give this a go just out of curiosity or if you've played a lot of the Lemmings games and want more puzzles (Even though Lemmings games are famous for having tonnes of levels). Don't play it just because you want 3D (that part of it is overrated) ... and if you haven't played the lemmings games, don't use this to measure them up with. 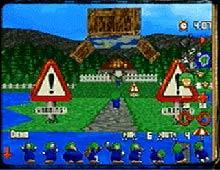 People who downloaded this game have also downloaded:
Lemmings 2: The Tribes, Lemmings for Windows 95, Lemmings Chronicles, The (a.k.a. All New World of Lemmings), Lemmings, Incredible Machine 3.0, The