Lemmings Chronicles, The (a.k.a. All New World of Lemmings)

Third official entry in DMA Design/Psynosis' celebrated puzzler series, The Lemmings Chronicles (a.k.a. All New World of Lemmings in Europe) is a disappointing entry that feels like a rushed product that was made just to cash in on Lemmings' success. The game is much inferior to earlier Lemmings games, without the same care and thoughtful design that the previous titles are known for.

TLC takes the Classic, Shadow and the Egyptian tribes from Lemmings 2, offering 20 levels each plus a practice level. There is even a plot which continues where Lemmings 2 left off: the lemmings escaped from their island with their flying ark and have found new land. There are new gameplay elements that actually do more harm than good. For example, for the first time in the series, there are monsters that can attack the lemmings. You can only escape from them most of the time, which makes gameplay more a matter of reflexes than brains—just frantically click the mouse to where the monsters cannot find you. In some levels, there are some already roaming around before new ones drop through the doors. This makes gameplay much more difficult, since you have to deal with two groups of lemmings—and sometimes more—instead of one sequence of marching lemmings. The lemmings are now bigger, but they somehow seem less cute. There are also some new skills, but none of them is very exciting. To complicate matters even more, there are now objects which the lemmings can pick up and use.

Unfortunately, new additions in TLC make gameplay more confusing than they are worth, thus destroying any of the simple elegance that previous games are famous for. The game also feels more like an action game than a puzzle game, thanks to the monsters. Only die-hard fans of the series will probably have enough patience to see this disappointing old game through to the end.

The Lemmings Chronicles: A New World of Lemmings is the third release in Psygnosis's puzzle series. It was developed by DMA design, like its predecessors. Following lemmings games were not. It was released in 1994 for Windows.

When Lemmings 2 left of, twelve tribes of lemmings had escaped from Lemming Island, with the user's assistance. Three of these tribes are featured here in The Lemming Chronicles: the Egyptian Tribe, The Classic Tribe, and the Shadow Tribe. Each tribe has vacated the flying ark that was used to escape from Lemming Island, and have landed on islands of its own, which need to be explored.

The game play of A New World of Lemmings is the same as other titles in the series. The user is charged with the task of assigning various skills to a group of lemmings in order to help them to reach the exit on each puzzling screen, killing off as few as possible. There are, however, some added twists. The first is the introduction of enemies on the islands, lending some elements of action games to The Lemmings Chronicles. The lemmings must battle potato beasts, and buzzards. A mole will dig diagonal tunnels, sometimes not in opportune areas. There is also the Lemme Fatale, who causes nearby lemmings to become love struck and freeze in place.

The orders the user may issue the lemmings follow: walk or turn, which is self explanatory; block, which causes the lemming to serve as a wall; jump; drop item; and use item. Items are represented by little bricks and can only be used by the lemming that picks them up. Items can help the lemming to dig, build, climb and so forth.

A New World of Lemmings features ninety levels of play, thirty for each of the respective tribes. Difficulty varies from very easy, to hair-pulling, frustratingly difficult in the later levels. There is also a practice level to get the user familiar with the new items and new manner of assigning skills to the lemmings.

In short, The Lemmings Chronicles: A New World of Lemmings is a continuation (more or less) of the standard lemmings games. There are some new twists, such as the monsters, that take away from the classic feel of the game, but add another dimension, which some will love and others will hate. The interface is easy to understand, and it has to be for the gamer to utilize the new skills and commands for each lemming. Overall, it is a challenging puzzler that fits nicely in the line of lemmings games. 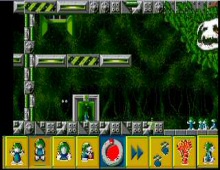 Lemmings Chronicles, The (a.k.a. All New World of Lemmings) screenshot