Similar to CivNET, Lemmings for Windows 95 is an excellent re-release of a blockbuster game (or in this case, 2 games) with some significant facelift that unfortunately wasn't as successful as the original. This is probably due to most gamers having the originals already and saw no point of getting exact same games, even if they are not ported from DOS to Windows 95 with sharper graphics, better music, and a Windows-friendly user interface. Best of all, this release includes both the original Lemmings as well as Oh No! More Lemmings, the more devilishly difficult sequel.

If you don't know what Lemmings is (and if you have been gaming since 1990 or earlier, you should be shamed), here's a summary of one of the best games ever made: your objective in each level is to lead the furry lemmings to the exit by teaching them various skills to overcome the obstacles, such as digging, parachuting, and climbing. You are given a limited number of each skill, and you must get all the lemmings to the exit within a given time limit. Needless to say, levels become increasingly difficult, and a combination of quick wit and reflexes is necessary to win. If you have never played a Lemmings game before, or have only played the sequels such as 3D Lemmings, this Windows 95 release is simply a must-have. After more than a decade, the charm of these furry rodents (and the glee of seeing them explode ;)) remains as strong and as addictive as when the game was first released in 1989 -- a true testament to great games everywhere. A must-have.

This game is an absolute classic, I played it as kid and now I play it when I get back from work.

Lemmings for windows 95, is much like the version which was released for the amiga A600, A1200, the Atari ST and later HTML versions (which had limited levels and poor sluggish graphics).

The levels are very colourful, with wacky designs, crazy music and killer puzzles. The aim of the game is very simple, the lemmings drop out of a hatch in the roof and try to escape the level in one piece.

You have to work your way around a range of different terrains, trying to make safe path for those suicidal creatures! There are different difficulties for people which are new to the game or those more advanced players which love it.

From the first level, the game slowly teaches you how to play the game and with a few goes you will get hooked. The next level sets get more and more tricky, as you proceed through the game. Some levels are an absolute breeze, some however will make you pull your hair out, crumple you keyboard into a little ball and throw it at someone.

As you go through this game you can use extras and cheats to make life easier, but you have to unlock them first. The difficulty level goes up to insane mode, this makes levels nearly impossible to complete and requires a lot of thinking to get your lemmings through to the exit.

The later levels in the game, start to introduce new ways to kill off your lemmings; falling in the path of a flame thrower, walking into a catapult and being hurled across the screen. If you get bored of the lemmings or get impossibly stuck, you can nuke them all, at a click of a button, better than one of those stress balls!

This game is the most challenging game I have played, it has given me many hours of fun and many trips down the computer store to buy a new mouse. This game needs no crazy system requirements, like a big hard drive or a mega graphics card, this is really one of the only games which you buy, get home, install it and can play the game without a hitch! The lemmings also crop up in a few other games including Hired Guns, Monkey Island 3 and as a picture hanging on the wall in Day of the tenticle, these are also great classic titles which are a joy to play. 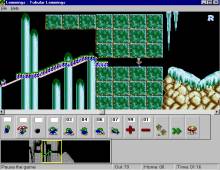 People who downloaded this game have also downloaded:
Lemmings 2: The Tribes, Lemmings, 3D Lemmings, Lemmings Chronicles, The (a.k.a. All New World of Lemmings), Lemmings