The culmination of the incredible (pardon the pun) Incredible Machine series combines the ingenious puzzles of its predecessors with the wacky, animated parts from Sid & Al's Incredible Toons (such as Mel the hapless human) to great effect, presented with crisp SVGA graphics, excellent on-line help, and a versatile puzzle designer. As the "Version 3.0" in the name suggests, it is not a revolutionary sequel but a great revamp of the original, but it succeeds on all levels. If you are going to get one ingenious puzzle game this year, this is it.

The Incredible Machine is a very classic inventive puzzle game. Everyone's seen cartoons in which you pull a string and it sets off a chain of events: pull a string, turns on a light, light bulbs boils water… you get the idea. If you want to go into puzzle play, you begin by going through a rather long tutorial.

In this tutorial, you are introduced to everything that is used in the game, from lasers which set off electrical appliances to anti-gravity force fields that cause balls to float and balloons to sink. Each game has a goal that you have to fulfill, for instance, "get all the balls in the basket." And also, don't think you can bypass the tutorial to get to the harder puzzles, the tutorial appears to be a must.

After you've completed the tutorial, then you go onto the harder puzzles. Don't be fooled by the bright colors and child appeal, these puzzles will get you thinking, and they advance from beginner level to advanced. You also only get a select number of hints, and if you can't figure out the puzzle from those hints, then you'll really be stumped for that puzzle! But don't worry, if you can't figure it out, just to the menu and click on another puzzle.

Not only does this game have puzzle play, you can also build your own puzzles and go head to head with someone else to compete to see who solves the puzzle faster. It's a great game if you're looking for a challenge and kids as well as older adults will get a kick out of it.

The graphics are surprisingly good for a game of this age, just make sure you set your compatibility to 256 color mode, or else it'll have trouble running. Otherwise, the game runs smoothly and even comes with background music. It's also very important you follow the install directions precisely. This game when setting up, wants to run tests to see if your computer is compatible with the game. If your computer is average, I suggest you not to run the tests. One reason is that you don't have the CD, and the test wants to test the speed of the CD-ROM by detecting information on part of the CD. If you try to insert other CDs, it doesn't detect it and will ultimately freeze your setup, causing you to restart your computer.

Also, the smaller, minimal install is more than enough for you to enjoy the game. The setup makes it sound like you won't hear music and it'll be slow, but once again, there is background music and it runs well. Besides, if you install the bigger file, it'll freeze your game. So enjoy the game and I hope it keeps you guessing what the heck goes on next! 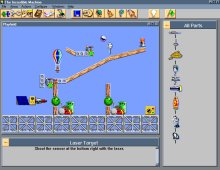