Ever wondered about those weird machines they build in cartoons? Like those enormous mouse traps Tom builds to catch Jerry? I know you all ask yourself why do they make it so complicated? But on second thought - admit it - on second thought you wish you could build machines like that. Just for fun. And this is... the concept of The Incredible Machine. You are given some materials and a goal to reach. Like have a jack-in-the-box break a fishbowl for example. With increasing difficulty you got to arrange your parts to make the machine work. The game is one of those few ingenious masterpieces and highly recommended for old and young gamers.

Undoubtedly one of the most unique games ever produced for the PC, The Incredible Machines 1 is a dream come true for anyone who as a child likes to tinker with gadgets and toys. It is a puzzle game par excellence and beyond: you have to use wacky gadgets and tools given for each level to accomplish objectives. Puzzles start out relaxing and get fiendish very quickly, as later levels require not only ingenuity but also precise timing. A true classic.

Very good puzzle game, where you have to use several objects and place them so that you will complete the level.

This game is AWESOME! :) I used to sit up for ages with my friend Leonie and we would try and nut out the hardest ones. For a game this has some dang hard levels! I can't actually say that I have completed them all, and then we take into account that there were more games made in this series!

There are so many things you use in this game, such as cats, mice, goldfish bowls, boxing gloves, trampolines, monkeys and electric fans. You get the idea. You are given an array of objects, and a task to complete. For example you can be given a bowling ball, pair of scissors and a balloon. Your task is to use these objects to pop the balloon. Of course this is a very basic idea of what you could be faced with. It gets to the stage where you have a whole heap of objects, a small screen and you have to make the cat fall down, pop 5 balloons and also make the 5 mice run and the fishbowl shatter ;). It turns into a real brainteaser.

As you complete tasks, they get harder and harder as you progress through the levels. But there are so many levels! If you complete all the tasks/levels (and if you do I salute you), then you can go into freeform mode, and just go hard with all the wacky parts and create your own monster levels. Very, very cool :D. I of course had my work cut out for me with the levels and challenges in the game, but to make some really strange things was so much fun. Hitting the cat with the bowling ball was fun ;). Yes, that's right, you can live out those fantasies of hurting that cat that just wouldn't cooperate when you were trying to do a level in the game! Make killer levels for your smart-arse friends that think they own The Incredible Machine ;)

This game is great for making your mind work really hard, and also for coming up with the wackiest contraptions. You almost feel like MacGyver playing this, in fact I'd suggest getting the MacGyver theme song and playing it for inspiration while you play this game. Also the music would be a great improvement on the music that is in the game. The music is umm.. awful? Yeah, that's a good word for it. The music is really bad =

The graphics must have been where all that part of the budget or the time went. The graphics are excellent! All the little parts have been drawn so well, and the animations as fans turning, rockets launching, guns shooting or the monkey riding the bike are so cool too. Everything is drawn really well in the game, and the menu's etc are all really cool too. A huge thumbs up for the graphics!

This game is great. It will keep you occupied forever. You can just keep on playing it, because there are over 100 levels. By the time you have completed them all and made some fun things in freeform, you can play it again. I can't remember the solutions to many of the levels; I could go through right now and end up just as psyched out as when I first played it.

A puzzle game like no other, have a play. Torture the cat and kill that goldfish. Tease the monkey while at it :P

Do you like inventing? Were you the kid on the block who always made domino lines instead of actually PLAYING the game? The incredible Machine is for you! This game is legendary to anyone who played DOS games. The Incredible Machine kept us busy for hours on end trying to find new and efficient ways to perform the task you are given with only a few random everyday objects. The tasks don't seem that hard "blow out the candle", but trust me, blowing out a candle has never been so complicated. The objects used to perform these tasks included things such as a fish in a bowl, a cat, bowling balls, tennis balls, tubes and even trampolines. Though we may not want to hear it, this game is very educational (but you would never know it because you're having so much fun!). The way the objects work together are very realistic, for example - the tennis ball bounces, the bowling ball doesn't.

Normally there is only one way to solve each puzzle as there are some stationary objects on the screen that you need to work around in order to do the task that is asked of you. If that idea doesn't necessarily have any appeal to you, there is also a "freeform" option that lets the player make their own contraptions and play around with the objects to see how they will interact with each other. Doing this you can also create your own puzzle with your own goals to see if any other people playing your game can solve them. This option is great if other people in your house hold play too, try and see if you can stump each other!

I remember when I was younger I would play this game like it was my job. I'd have to call in my brother to help me every 10 minutes. He was older and had much better problem solving skills. At the time I was probably a bit too young to play it well anyways, I just liked to watch the cat fall on the trampoline! As I got older I was still addicted to the game, and as I learned to complete more puzzles, I would finally reach the more difficult ones, some of which I still can't solve today.

In all, this game is so much fun and really great for kids especially. And with almost 100 levels you will be playing for hours on end (I know I always do!) So if you like inventing and solving puzzles, you will LOVE to play the Incredible Machine! Go ahead and test it out :) 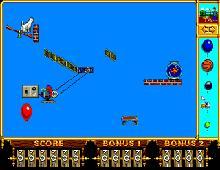 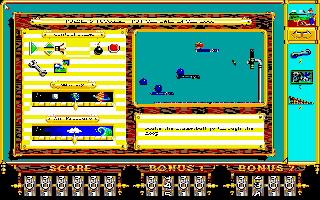