Atomino, not to be mistaken for Atomix by Thalion, is probably best described as a molecular version of Tetris: simple in concept, but addictive in gameplay.

The objective in the game is to combine atoms into molecules in such a way as to leave no "orphan" atoms. Anyone who's taken chemistry will perhaps remember (not me) that each atom has a valance (look it up ;) ) of one to four, i.e. they can combine with one, two, three, or four other atoms. A complete molecule is defined simply as a structure of atoms in which there are no more free combinations. In each level, you must create a specified number of molecules from (randomly generated) atoms to move on to the next level. A very interesting game that is more original than you think. Also gets incredibly addictive in later levels when your screen quickly fills up with atoms. Highly recommended for all puzzle lovers.

Note: The crack for this game doesn't seem to have removed the copy protection for "game mode B", while "mode A" works fine. This is the long-lost English version.

Atomino is a puzzle game, where the pieces are atoms. The game is played agains the clock, with other constraints added later to ramp up the difficulty. The graphics in this game are well done. The game uses different colors for various types of atoms. The sounds in the game are quite good as they fit quite well in the game. The controls are also fine, so that you won't die so soon because the controls are so hard. The game's difficulty increases with the complexity of the molecules you'll have to build, so not by increasing speed.

The object of this game is to form molecules of a certain size. A molecule is comprised of several atoms, and is considered complete when every atoms' electrons are paired with those of its neighbours. You are given atoms with a varying number of electrons, wich determines how many atoms it must have next to it to be complete. 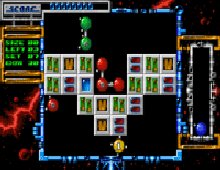