Block-O-Mania is an excellent Soko-Ban-style game from Cassiopeia, a now-defunct shareware developer based in The Netherlands. The object of the game is to push all blocks onto the right storages: red blocks onto red storages, green on green, and blue on blue. Naturally, your job is more complicated than it sounds because there are walls and other obstacles in your way.

Block-O-Mania is best described as "Soko-Ban for experts." The difficulty level escalates very rapidly after the first few levels, and if you are not a habitual puzzle gamer, you might find yourself stuck as early as Level 3. Your progress will be hindered by one-arrows, one-time passages that turn into solid walls after you pass through them, and many other devious traps. Like Soko-Ban, Block-O-Mania rewards meticulous and thorough planning. You will likely have to restart most levels multiple times before you get it right - but you will feel satisfied with yourself once you do. This is definitely one of the best puzzle games I have come across, Soko-Ban or otherwise, and one that will keep fans of challenging brainteasers occupied for hours on end. You can even design your own custom levels in the registered version, which is what you can download here. Highly recommended! 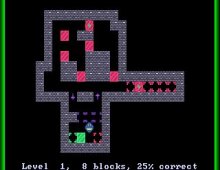