One of the most unique puzzlers in the same vein as The Incredible Machine series, Marble Drop plays like a cross between Dynamix's classic and the Japanese game of Pachinko. Games Domain says it all about this excellent game:

"In Marble Drop, you send some poor, innocent marbles who've done nothing to hurt anyone in their quiet, spherical life and send them on a helter-skelter journey around devious contraptions.

Here's the twist. When your marble runs over certain sections, the paths are re-routed to different parts of the contraption. If the marble runs over a button, it might activate a "diverter" and send the next marble somewhere completely different. In essence, you have to visualise what will happen. Sometimes you can spot the principle immediately. Sometimes you can guess what might happen for the first couple of balls, and you have to just suck it and see thereafter. And sometimes you have no clue whatsoever! There are a few further wrinkles to the game. Steel balls are 10% the price of coloured marbles, and so can be used as test marbles or to help release a catch when you don't want to use a valuable coloured marble. Black marbles are very expensive, but acquire the correct colour when they arrive in the target bin. You start with seven marbles of each colour. Any surviving marbles are carried forward into the next puzzle.

There are 50 puzzles in all (including 5 bonus puzzles which can only be accessed via combination locks which appear in certain puzzles). Each puzzle is decorated with very nice Leonardo-esque sketches. Cleverly, explanatory notes in da Vinci's own fair hand form part of the background. These help you understand what new pieces of equipment do, lending a nice learning curve to the game. The sound effects employed are typical plinks and plunks, and they're pleasant enough.

The range of devices used in the puzzles is quite varied, ranging from buttons, switches and plungers in early puzzles, and on to transporters, splitters, marble makers and other space-age devices in the later puzzles. Although the new gadgets seem bemusing at first, I found that upon replaying the levels once or twice I managed to score highly. After level 20, things start getting a little mad - perhaps a little too mad. Be warned - this is not a game for the faint hearted.

The main problem I have with the game is that the scoring system is pretty pathetic. Want to get a huge score? Just send marbles round one of the several puzzles which involve a timing or "perpetual motion" concept and go and have a cup of tea. Or play the same puzzle time and time again! My other main gripe is that I want to actually SOLVE the puzzles. Marble Drop allows you to, in effect, cheat by buying extra marbles at will by spending points. I think this takes a lot away from the game. Luckily, you can tell if you've solved the puzzle via the optimum solution if you get a 5000 point efficiency bonus at the end of the level. For purists, this is the only way to really get the most from the game.

When I first read the box, I thought this was a variation on The Incredible Machine. To some extent, I am disappointed that the concept wasn't taken this far. It would have been a lot of fun to draw your own tracks and use the 30 different equipment pieces to construct puzzles. Also, bear in mind that all you do in the game is drop marbles in funnels and watch. Sometimes the marbles needs specific timing, but on the whole this is not necessary. As such, the gameplay is rather limited. Marble Drop succeeds in being a highly original puzzle game. However, it just misses out on a Silver award because it won't quite be every puzzle fan's cup of tea. I enjoyed it, and so might you if you have the patience this game requires." 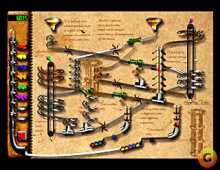