This is a true classic. One of the games which made both me and my family go entirely nuts with game fever when it came out brand-spanking-new. My god, the hours we put into this. The sheer infinity of gameplay makes thisgame a gem. One of those gems that aren't made often. Three block sets, flat (standard tetris blocks), basic (with some awkward blocks) and extended (only for the hardcore players, these blocks are extremely weird), 10 levels, playing fields from 3x3x10 to 7x7x18 (3x3 = width and 10 would be depth).

I'd say, just go play it if you haven't played it before. It works fine on modern day computers so no heartache over not being able to play it.

The great follow-up to the legendary Tetris - now it's 3D! At first a bit confusing, but once you get accustomed to the controls ('S', 'D' and surrounding keys for rotating the piece - arrows for movement) you will have lots of fun with it! Far more challenging than the original Tetris, but on the other hand maybe lacking the ingenious simplicity of the ancestor, this is still one of the best puzzle-games around - even after 10 years.

One of the best Tetris clones ever made, California Dreams' Blockout is essentially Tetris with a third dimension: depth. In this first official Tetris variant that was not published by Spectrum Holobyte, you must rotate the blocks in 3D in order to fit them on the bottom of the grid. Advanced users can play this game with odd three-dimensional pieces. Trixter said it all in his solid capsule review of the game: "A very fast and capable simulation, it solved the problem of hidden surfaces by displaying each block as a wireframe before dropping it down.

Blockout is also very configurable. You can rotate blocks forward and backward along the x, y, and z axis (although all you really need is the x and y axis), and you can specify how many levels deep or high/wide when you play. A seperate high score is kept for each configuration for fairness. Support for multiple graphics modes is also well done, making Blockout playable on almost any machine.

My only complaint with Blockout is that there's no way to see empty spaces underneath the top layer. This is a hard problem to solve visually, so I'm not really blaming the designers (who did a great job). I guess I'm just lamenting my own memory's inability to keep track of 4 or 5 stacks of blocks. :-)" Tetris fans, eat your heart out with this great variant that is much better than Welltris, the "official" 3D Tetris. 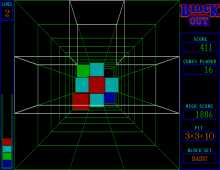