Maybe not the first attempt to put a puzzle-game into realtime - but for sure the most successful. Tetris was a milestone in gaming history and hasn't lost a bit of its addictiveness till today. Best example for this is myself trying to put up this section but constantly ending up just playing and playing and playing.

But only saying well, this is a good game would not be enough. The story around Tetris is truly worth this legendary classic. It starts off in Moscow in 1985 - Alexey Pazhitnov develops Tetris for the Electronica 60. It soon was ported to the IBM PC starts its way around the world. First spreading in Moscow, then reaching Hungary where Apple II and C64 versions were made. Pretty uncommon, eh? One of the greatest games, yet it was not developed by "western" software houses. But oh well - you didn't think them capitalists could let their hands off it, did you? The rights on Tetris were sold to Mirrorsoft by someone who didn't even own them yet. Of course he made efforts to get the rights he sold afterwards, but he wasn't the only one. A race for the rights to port what would become one of the bestselling computer-games in history begun. Lawsuits started to determine what kind of rights were sold to whom - basically western industries played their favorite game of playing tricks on each other while the REAL "hero" of it - Mr. Pazhitnov - made almost no money from his invention.

This was just a very brief summary - most likely not very accurate, but if you're interested in this I strongly recommend reading this history of Tetris. No Hollywood-writer could've come up with a better story. ;)

Tetris inspired a lot of other games, starting with Super Tetris (with special blocks and bombs as rewards for eliminated lines) going on with Block Out (Tetris in 3D) and going on endlessly with millions of clones, remakes, enhancements - dunno what else. The idea of Tetris is so simply yet ingenius that it invites programmers from all over the world to play around with the idea and add something new to it.

Here is the culprit for the huge decline in global productivity for at least a few months, if not years :) No description should be necessary here-- let's just say that if you really don't know what Tetris means or never saw falling blocks in your dreams, you ain't seen nothing yet. It's probably also the most cloned and imitated game in the world. Definitely NOT an old game, but its designer Alexei Pajitnov definitely is, as he never became well-known. Check out his other games on this site! 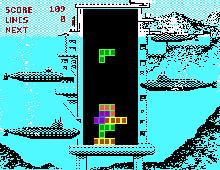