Just another Tetris-clone? No - this is something like an advanced version of that game. For every line you kill you get a certain amount of bombs which can destroy other blocks. Yeah - now that sounds easy, you may think - ha! don't let yourself fool ya! You don't play like on an empty board - there are always lines with spaces at the most uncomfortable places below - once you manage to get rid of a certain amount (meaning you remove those on black background) those buggers come creeping up again drawing up a picture. Well, of curse that's the way to complete the levels and not just another nasty way to make the game harder! Once you have the full pic up you advance to the next level and - like in the original Tetris - the blocks fall down faster.

The possibility to plan with the bombs adds a strategic element to the game - you almost always have a chance to get back into the game. If you left too many holes in the lines below the game was over almost for certain in the original game, now you can leave out holes at the right places and make your way through with the bombs to create just the empty slot you need for the next tile. And then there's yet another goodie: you have little bonus-blocks which for example kill the whole line they're in when you blow them up with a bomb. Nice feature. Overall a VERY good game. Just starting it made me play it for an hour with the excuse of getting a really nice one - well, I played and played and then - like my mother once used to say - "I had a look at my watch..." Oh yeah - a Top-Game!

This follow-up to the hugely popular Tetris didn't do as well commercially, but it does offer a lot of neat twists to the falling block concepts: two-player mode, special items such as bombs that can clear away many blocks at once, and much improved graphics. Anyone who loves Tetris will love this game, except perhaps for a handful of purists :) 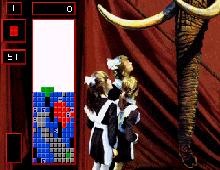 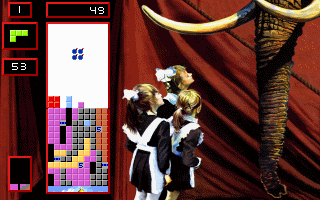