One of the best Tetris clones I have ever come across, Alizarin Tetris (Atris for short) has everything you would want in a Tetris game: customizable colors and block sizes, special tiles and bonuses, hot-seat and TCP/IP multiplayer support, different game modes, and - best of all - multiple AI opponents.

Alizarin Tetris has more features than many other Tetris clones combined. While you can still play the traditional Tetris solo game, it is the competitive mode (against computer or another human player) where the game really shines. Different AI "personalities" offer a wide range of challenge, and multiplayer games are a lot of fun because there are many new elements that are not in the solo game. For example, in a multiplayer game, if you clear 3 more or rows at once, your opponent's screen will be obscured for a time. If you clear 3 or more rows twice in quick succession, the "blank" timeout extends. If you are able to clear 5 or more rows at once, an extra row of garbage will be added at the bottom of your opponent's board. There are also many special blocks such as bombs (similar to Super Tetris, but shaped like normal Tetris blocks so you have to find a good spot to land them), skulls (destroy all non-garbage tiles close to them), and more. With great graphics, solid gameplay, and plenty of game options to keep you occupied, Alizarin Tetris is a great freeware Tetris game that will please both solo players and those who prefer a head-to-head challenge.

Note: The download on this site is the Windows 95/98 version.

Atris: Alizarin Tetris is another Tetris clone that is available for both Windows and Linux. It is obvious that the developers have tried to add as many new features as possible to the game and there really are many things included as well compared to many other Tetris games.

Some of the most unique and new features are the option to play against the computer (you can even play two human players against two computer players, the option to enable power blocks that provides special random features (but normally some that help you) and a few more things. You can also setup different kind of blocks, the colour of them, the sound and much more making the game very customizable which I really like. The actual gameplay is also quite good but there is something about the game that I don't like. It might be the dark interface but I'm not sure that is the only thing. I'm sure you will have your own opinion about the interface anyway.

The graphics are decent but nothing special and the sound is the same. If you are tired of all the regular Tetris clones this will be a fresh version though because of the many new and unique features and the option to play against the computer on time gives the game a whole set of new challenges. 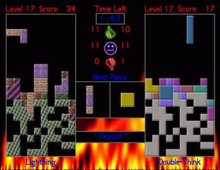 People who downloaded this game have also downloaded:
Tetris Classic, Tetris (from Mirrorsoft), Block Out, Super Tetris, Lemmings 2: The Tribes