Deflektor is an excellent PC remake of the original (well, back then it was) and difficult puzzle game designed by Costa Panayi first for the Spectrum computers. The idea is to rotate various mirrors scattered across the screen so that a beam of light is deflected from the starting point to the end point before your energy runs out.

To complicate matters, there are walls and various other objects that the beam has to cross or destroy before you can complete the level. Some surfaces reflect the beam (but you can't control which way they do), some absorb it and yet others act as a sort of teleport, moving the beam to another part of the grid and allowing you on some screens to get at places that would otherwise be completely inaccessible. On all but the first three screens, there are also laser bugs that float around, changing the angle of the mirrors and generally getting in your way. And there is a strict time limit for every level, which means you have to think and act fast.

Deflektor boasts over 60 levels of devilishly difficult designs, although the early ones are easy enough to whet your appetite and teach you the basic concepts. Definitely a must-have for every puzzle fan, especially fans of challenging brainteasers. 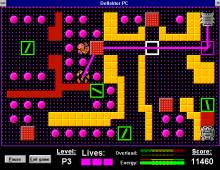