A good multiplayer puzzle contest game based on an underrated British game show in the early '90s, up to 16 players compete in Crystal Maze to be the first to get out of the maze, which comprises various "zones." In each room, players select the type of puzzle to tackle, which range from wordplay to logic problems to mysteries. Hot-seating is the only way to play the game. Overall, it's a fun and captivating puzzle game, if a bit repetitive and obscure at times. 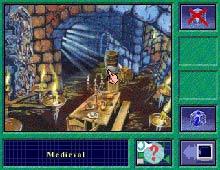