Simple Sudoku is a great Windows program that generates high-quality Sudoku puzzles that are symmetrical, with a single solution, and do not require trial-and-error to solve. If you have never played Sudoku before, here is the summary of this fun deduction game: you must fill the 9x9 board with integers from 1 through 9 so that each row, column, and 3x3 box contains only one occurrence of each number. First published in the USA in 1986, the game became very popular in Japan, with regular Sudoku columns appearing in daily newspapers. The game finally achieved international acclaim in 2005.

This well-designed freeware version features 5 levels of complexity, ranging from Easy to Extreme. Each puzzle is generated randomly, so the number of possible games is virtually infinite. The game also includes built-in tools to help deduce and solve puzzles: it keeps track of possible values for blank cells, providing filters and color markers - useful tools that eliminate the tedium of manually keeping track on paper. And when you get stuck, Simple Sudoku provides gentle hint to nudge you in the right direction without giving everything away. Last but not least, it includes multi-step undo feature (which makes it possible to undo your moves all the way to the beginning), save and load games, and the ability to prints blank grids for good old-fashioned paper & pencil game. Highly recommended to fans of brainteasers and crossword puzzle lovers who want a change from language-based puzzles. 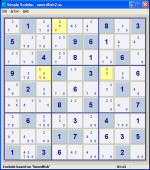 People who downloaded this game have also downloaded:
Lemmings for Windows 95, Incredible Machine 3.0, The, Lemmings, Lemmings 2: The Tribes, Incredible Toon Machine, The