This is one of kind puzzle game. Once you enter into dr. Brain's castle after the first puzzle. Many will follow. Walk through his Castle and try to solve the strange and mostly logic mathpuzzles.

The world of edutainment saw another addition to the stable in the early nineties when Sierra Online introduced the world of Dr. Brain. There were several titles in the series, all of which featured educational puzzles for children to try to solve, improving their logics and overall deduction skills. The direct sequel, which is another puzzle game, is the Island of Dr. Brain.

The user plays an individual who is looking to become the assistant of the mad scientist, Dr. Brain. After looking in the classified ads, of all things, the user finds the job offering and decides to apply. Dr. Brain has set up a series of puzzles as a test to determine who would be the best candidate for the job. There are many mazes and a memory puzzle that comes into play before the user even enters the castle.

The puzzles cover a multitude of subjects, but logic and mathematical skills are the two that will be most well used. There is a cryptogram, requiring word and logical skills. The player has to assemble a surreal, virtual jigsaw puzzle. There is one level that deals entirely with astronomy and the layout of the stars. Some of the completed puzzles will magically morph into the next room that the user will have to navigate.

The game is entirely mouse driven, featuring point and click game play. The cursor changes from the standard pointer to a hand that will interact with items around the environment. It will also change into the stereotypical big eyeball that will give information about whatever it passes over. Now and again there will be a small clue hidden in the textual information about a thing that the eyeball passes over that will help the user to continue quickly if he picks up on it. Often times, the cursor will lead to jokes and jibes if the user tries to glean information from what basically constitutes "non-playing objects" or things that have nothing to do with any of the puzzles. The game basically pokes fun at the user for trying to make something out of nothing.

In summary, the Castle of Dr. Brain is a good educational game that will challenge users on several levels, besides mathematics and logic (although those are the two mainstays). It also features a musical score filled with classical music by Bach. The reward for completing the game, aside from getting the job applied for, is meeting the people who helped to create the game. While the ending may be somewhat anti-climactic, the journey to the end is great fun and well-worth the download. 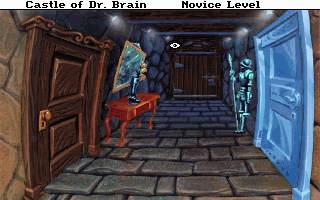