Enigma is a superb puzzler in the same style as Dongleware's underrated puzzler Oxyd series. In the author's own words: "...Enigma is a puzzle game inspired by Oxyd on the Atari ST and Rock'n'Roll on the Amiga. The object of the game is to find uncover pairs of identically colored Oxyd stones. Simple? Yes. Easy? Certainly not! Hidden traps, vast mazes, laser beams, and, most of all, countless hairy puzzles usually block your direct way to the Oxyd stones."

While Enigma is not a straight remake of Oxyd (which was released on PC anyway), it is a very addictive game that manages to recreate the gameplay mechanics, graphics style, and challenge of Dongleware's games. Like Oxyd, you control a small black marble and have to find and "open" matching pairs of Oxyd stones. When you touch an Oxyd stone with your marble, it opens and reveals a color symbol. There are two Oxyd stones with the same color in every landscape. You must touch two matching stones in succession to open them permanently: if the colors don't match, the first Oxyd stone will close again. To beat the level and move on to the next, you have to find and open all pairs of Oxyd stones. Also like Oxyd, you will need to move various kinds of objects on the level in the right order as well as use items - many of which you can pick up and stored in your "inventory," which is displayed at the bottom of the screen. You will need to build bridges with stones to cross water, hit stones with magic wands to transform them, and solve many more puzzles in a myriad interesting ways.

With over 140 levels, Enigma is just as fun and maddeningly challenging as Oxyd games. It also offers a few new and unique twists: there are "two player levels" which you control both black and white marbles. These levels are designed to be played by two people over network, but since network play is not yet ready (the version I reviewed is 0.81, which is stable and complete otherwise), you can just switch between the two pieces. There are also "meditation levels" that are reminiscent of Heaven and Earth. In these levels, careful timing and reflexes rather than strategy are needed - the slightest mouse movement can send the white marbles out of their "pits." The game can even import original levels and sounds from Oxyd series. With smooth graphics and excellent gameplay, Enigma is a must-have for all fans of puzzle games - whether or not you have played the Oxyd series. Highly recommended! 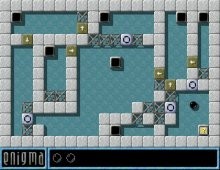