Caravel DROD is a superb - and free - updated remake of the maddeningly addictive Deadly Rooms of Death (aka DROD). For a description of what DROD is, read the review elsewhere on this site.

This new 2002 version includes all the levels from the original game, plus many new features including: the ability to restore a game from any point you have already been to, at any checkpoint you have stepped on in the room; new SVGA graphics; new sounds (including my favorite "splat" sound); the ability to record and replay demos. Although it does not contain any new levels, future versions of Caravel DROD will feature new levels as well as a level editor to design your own. As it stands, Caravel DROD is THE version of DROD to play if you have never seen it, and fans of the original will still appreciate the polished new features that make the game look and sound better than ever before. The restore option alone should help restore your sanity while you are playing this devious old game. Simply put - this is a must-have if you like puzzle games. Since the game is now open source, keep an eye on the Sourceforge development site for new versions in the future.

Note: the story of this version, according to the author Erik Hermansen, goes as follows: "to explain the credits properly, I have to point out that there is an earlier version of DROD published by Webfoot Technologies, which I call "Webfoot DROD". I received permission from Webfoot to make a free version of DROD, (the one you have right here) which I call "Caravel DROD". Caravel DROD was written almost entirely from scratch, though it looks nearly identical to the original Webfoot DROD." 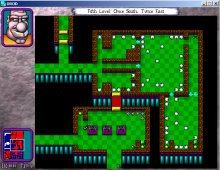