Olaf, Erik and Baleog lived happily in their village but one day something strange happened - something came from the sky and kidnapped our three little heroes! Yes, you guessed it right... it was a space ship and was controlled by a creature called Tomator. Now, the lost Vikings have to find their way back home with your help. The Lost Vikings is partially a platform game but since it has many, many puzzles it's more a brainteaser than an arcade. You will control all three Vikings (one at a time) and use their special abilities to advance to the next level. All three must survive or the mission is a failure. As mentioned before, all three have special abilities - Baleog uses a sword and a bow and is the only one who can fight and kill enemies. Erik has a big shield and can protect himself and his friends and even fly (!!!) if he puts the shield above the head. Olaf is fast and hardheaded. He can run and jump over pits and use his head to break walls when necessary. There are many levels in this game and each is more beautiful than the last one. The game takes place in a spaceship, prehistoric era, Egypt... The levels and puzzles are average in difficulty and the humor in game is great. Lost Vikings is one of the best puzzle games ever made!

This is an entertaining little action/puzzle game. Your mission is to control three Vikings around on levels filled with traps and monsters. Each Viking has his own special ability. The first can run and jump, the second has a big shield to stop lasers and similar things and the third is the fighter using a sword.

You switch around between them, using their different abilities to finish the level. Sometimes you need to kill a monster or block a death ray or jump to a switch to open a door. The game starts out fairly easy and then gets harder and harder. Each level is very detailed and you have to try many times on certain levels before you find out what to do in order to complete the level. At some levels you have to be very creative in order to complete the levels but this is also what makes the game fun to play.

The game has quite detailed graphics, which is also essential as there are several small switches you have to look out for and can't afford to miss in order to complete the game. The best thing in the game is that all 3 Vikings are needed on each level. The Lost Vikings is one of the better and most unique puzzle games and is highly recommended if you are into this genre.

The Lost Vikings is one of the most charming and unique puzzle games you'll ever come across, despite some console-style quirks. Three stalwart Vikings are accidentally sucked into an alien spaceship during one of their pillaging voyages... and find themselves in unknown land. It is up to you, of course, to guide them home.

Gameplay in The Lost Vikings is best described as puzzle-based platform, similar to Lemmings or more recently The Humans: the goal in each level is to get all three Vikings to the exit. To do that requires co-ordinating and timing the use of the Vikings' unique skills. Eric can jump, run and bash through walls with his tough helmet. Olaf has a shield which can block attacks, function as an air glider or as a step to stand on. Baleog can shoot things with his arrows or kill things with his sword. He can also flip switches from afar by shooting them with an arrow. You will have to use the three Vikings as a team, if you hope to get past the increasingly difficult levels and puzzles, switching back and forth between them as necessary. Needless to say, each new level is more difficult than the last, and timing as well as reflexes (i.e. quickly switching between Vikings) become critical to success.

Fortunately, help comes in various ways that keep frustration down to a manageable level. Hint buttons strategically placed throughout the game aid you through tough spots, especially in later levels. The Vikings have a "health bar" which can be regenerated by eating food found on the level, and can sustain some damage from aliens' attack. This allows for multiple solutions to some puzzles; for example, you can run Erik past the shooting aliens if you can think of no way to get him past them (and Baleog and Olaf are stuck somewhere), hoping that he won't die before making it through. There is of course the "optimal" way to finish each level without lowering any Viking's health, but the possibility of finishing it in different ways is a welcome feature that any puzzle beginner will appreciate.

As icing on the cake, there are many different, diverse worlds to explore, ranging from Prehistoria, to Egypt, The Great Factory, Wacky World and more. The Vikings come alive as they talk, bicker, and fight each other in humorous cartoon captions between levels. The only bad thing I can think of about this underrated classic is that the lack of in-game save splots. Some levels are very long, so when you get back to them, you may via password, you may have to backtrack a great deal. Other than that, the game's flawless gameplay and great graphics will keep puzzle lovers entertained for hours. 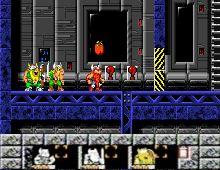