Designed by Cliff Johnson, one of the best puzzle designers ever, the concept behind Fool's Errand is so original that it defies categorization. Suffice to say that it is part devilish puzzle collection, part novel, part adventure and an all-around classic.

While the game would deserve classic status on the merits of unique puzzles alone, it is the masterful blend of puzzles with an enchanting, well-written story (a medieval Fool who runs errands for people) that evolve, that makes Fool's Errand a uniquely original game. When each puzzle is solved, the player gains access to more story (with more puzzles to solve). In a master stroke unmatched in creativity to this day, Cliff even designed an uber- puzzle-- a big puzzle that can only be solved once all the smaller puzzles are solved and all the story pages are revealed. Solving this overarching puzzle requires careful re-reading of the game's story, as clues are hidden between the lines and old paragraphs take on new meanings.

Puzzles in the game are wonderfully diverse. Some, such as the card game you will play, are downright original, and even the derivative ones (such as the dozens of word puzzles) are hardly ever boring. Characters in the story, which sounds as if they were plucked from Alice in Wonderland, are fleshed out with great detail and confidence. There's really no fault I can think of for this game, except that you will be sorry to see it end when it does. See for yourself why I think this game deserves to be on every "Best Computer Games" list; if you are even remotely interested in puzzle games, Fool's Errand is a must-have.

The Fool's Errand is a very strange game, unlike everything else. The different elements of the game might not be very original, but the way they are put together sure is.

What The Fool's Errand basically is, is a puzzle game stringed together with a story. As you start the game you have access to some chapters in the story about a fool that goes on a quest around the kingdom. Each chapter has a puzzle connected to it, which in some way has to do with what has happened or is to come. When you solve the puzzles you gain access to new chapters. The puzzles range from easy to very hard and they're quite varied. There are a lot of word games. Find a number of words in a mass of letters, piece together words from some given letters. There are also some jigsaw puzzles, ranging from the ordinary "put the picture right" to the more challenging ones where the pieces have letters on them and in addition to having to put them together correctly, they also have to spell out one or more words. There's a lot more kinds of puzzle available too. While some might be a bit boring for some people (I've never liked anagram puzzles, so I didn't like those), there's enough variety too keep you interested. And since you have access to several chapters at once, if you get stuck in one you can just try another one for a while. All progress is saved when you leave a puzzle, so you don't have to worry about redoing a lot of work. The interface is fast and you have instant access to every chapter that you've unlocked, with markers to show which ones you've solved.

The writing in the story isn't perhaps the best in the world, mostly because the chapters feel so unrelated. But it's very nice to have some sort of link between the puzzles, and in several puzzles the writing is an integral part in solving the puzzles.

There aren't really very much graphics in the game. There are a few puzzle interfaces and then there are the puzzles where you have to rearrange pictures. But what there is looks good enough. Sound is just a few subtle beeps from the PC speaker, and that's probably for the best.

The Fool's Errand is a great puzzle game with a difference. The varied puzzles and the cool ways they are connected into the story make this a must play for anyone who enjoys a little brain gymnastics. 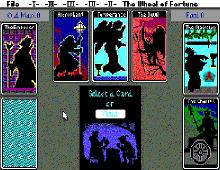 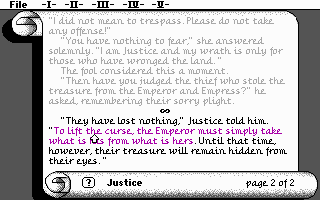 People who downloaded this game have also downloaded:
Castle of Dr. Brain, Chip's Challenge, 3 in Three, Muppets Inside