Probably Cliff Johnson's best game since The Fool's Errand, created at the height of his creativity, 3 in Three is a charming, unique puzzle adventure that unfortunately is very little known due to its being released for the Macintosh only. Thanks to emulators, you can now experience this wonderful, forgotten game on your PC.

The plot of 3 in Three is as original as ever been devised: you are the letter "3," who was zapped off the Petty Cash Report in MS Excel during a power surge, and landed in a strange land inside the computer where numbers don't count and letters spell disaster. Your task as 3 is to repair the system, evade a virus detector, outwit the annoying pi symbol, and deal with a lot of misfit vowels on your quest to find your way home-- back to the numbers.

Puzzles in 3 in Three are similar to The Fool's Errand, if only many times more devious and there is no large, uber- puzzle to solve. Over 80 word puzzles, logic dilemmas, and brain twisters abound, each one progressively more difficult than the next. Although there are less puzzle types than The Fool's Errand, the fewer variety is more than made up for by the sheer difficulty of some puzzles that will stump even puzzle experts. One example of this is the geometric lift puzzles, in which you must get 3 to the other side by walking on lifts. You can progress to the next lift only if it is lined up with the one you are currently on, and each step up or down moves lifts according to a geometric sequence which must be determined. The tenth time you meet one of these puzzles, you will groan with frustration.

Despite some very hairy puzzles, 3 in Three's ingenious plot and fun cut-scenes will keep you glued to the screen right to the end. Highly recommended for all puzzle fans, especially those who love The Fool's Errand. Just be prepared to get stuck a lot, and take heed of the hints printed in the manual -- you'll likely need most of them. 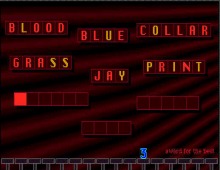