More commonly known as the best game in Microsoft's Windows Entertainment Pack series and one of the most innovative games ever made for any system, Chip's Challenge was actually first released by Epyx in 1990 with little fanfare.

The game even has a neat plot for an action game: Chip is a love-starved nerd who's desparate for a date with Melina, a fellow nerd (nerdette?). To prove that he's worthy of her attention, Chip must go through dozens of rooms to get to Melanie.

Unlike a typical puzzle game in which every level presents only slight variations on the same theme, Chip's Challenge offers such a wide range of tasks to perform and sub-goals to reach on your way to the exit, that no two levels feel the same. The main goal is to escape, but the subtasks needed to accomplish this varies so widely that it's impossible to find a universal strategy. Among other things, Chip will negotiate mazes, race against time limits, avoid thieves, turn off force fields, deal with water, fire, and ice hazard, avoid chip-eating creatures. And he must do all this in addition to collecting all the computer chips on the level to open the exit door.

The seemingly endless variety of levels is what makes Chip's Challenge so addictive, since different levels require different strategies to finish. Some levels require doing things in a certain sequence; others have lots of possibilites but only one answer, and still others require precise timing and fast movement. Most levels, however, emphasize quick thinking over reflexes, so anyone who is not blessed with lightning-fast reflexes shouldn't feel too intimidated.

Last but not least, the interface in Chip's Challenge is extremely friendly, and encourages replayability. Chip has an unlimited number of lives, so you can redo a level as often as you want until you solve it. If you fail too often, the game will even generously let you skip the current level. Best of all, the first eight levels are tutorials that gradually introduce new gameplay elements so that players will not be overwhelmed. Overall, this is one of the best puzzle games ever made, and a must-have for every puzzle gamer, especially experts who have frowned at easy games.

Being a great puzzle game, Chip's Challenge can (and will) make you play it for days without stopping! And it even has a story: Chip is in love with Melina and has to prove himself to her - he will complete all the levels and collect all the chips.

Each level you play requires you to do several tasks before you can actually collect all the chips and advance. First eight levels serve as tutorial to teach you most of the things such as how to use objects, buttons and teleports or what 'thieves' are. Yes, there are objects that will allow you to walk over fire, water and such.

Chip has unlimited lives so you will not have to worry about that aspect of the game. Also, if you fail to complete some level in many tries, you will be offered to skip it. Neat, eh? Highly addictive and fun game. Strongly recommended! 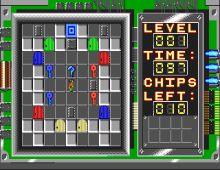 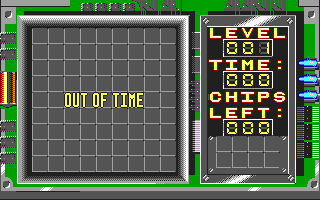