Second Age is an excellent 3D giant robot ("mechas" in Japanese) action game set in space. The game offers excellent mecha designs, fun gameplay, and a variety of modes including Story, Practice, and 2-player. You can choose from 8 available mechas, each with its own weapons, strengths, and weaknesses. The Story mode takes you through a series of missions set in 4 environments, ranging from deep space to planetside. You view the action from a third-person perspective, as if you were hovering behind your mecha.

The mechas are definitely the highlight of Second Age. I particularly like "Silver Bullet," a mecha that can transform into Hunter, a jet fighter (more or less like the mechas in Macross and Gundam anime series). Another fun mecha to play is Deseed, which can launch its own arms and heads as weapons at enemies. The interface is well-designed and informative without being intrusive: you see all the salient information including your health bar, primary and secondary energy level (needed to use shields and weapons), shield level, and a small radar that shows the enemies' positions relative to you. The controls are easy to learn, but it will take some time before you can master the moves of all the mechas, because not all of them are easy to remember.

Although Second Age is a lot of fun, it has some weak points. Two-player mode is awkward, because you cannot reassign the keys. The game is also very difficult in Story mode - it took me many tries to pass the second mission, and there is no option to change the difficulty level. If you are not an expert in this kind of games, you will definitely be frustrated with having to face 6-7 tough enemies at the same time. The last gripe I have is that contrary to most freeware games from Japan, there is no background music in the game. But as the author is still actively improving the game, here's hoping we will see a version with soundtrack in the future.

If you enjoy the likes of Mechwarrior, you will likely enjoy this fun freeware game. The game is in Japanese, but you won't need to read anything to finish the game as the goal of all the missions is the same: kill everything that moves. 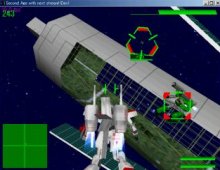