One of the best anime shooters I?ve ever played, Idinaloq is an amazing game that boasts an incredibly high production value that would have justified its release as a commercial game. But fortunately for us, Namikaze Project decided to release this gem as freeware?no strings attached.

The premise of the game is nothing you haven?t seen before: the Earth is under attack from outer space, and you are the only one who could save it. The difference is that you play a female pilot this time around?chosen from 3 possible characters, each of whom has her own spacecraft, which comes equipped with unique weapons. Powered by DirectX engine (6.1 or higher), the graphics are nothing short of astounding, especially considering the game?s freeware status. The ships, backgrounds, and characters are all very well designed in the best anime tradition, and the action is fast and furious. The game even includes very high-quality opening and ending movies, complete with Japanese theme song and excellent anime. Most text in the game is Japanese, but as it's a shooter, knowledge of the language isn't really required to enjoy this gem. With excellent graphics that rival any Playstation shooter, addictive shoot-all-in-sight gameplay that spans many levels, and excellent soundtrack and voice acting, Idinaloq is a severely underrated, highly polished gem that deserves the limelight it never had.

Note: This download includes the full game, with high-quality music (22MB), and both the opening and ending movies in \MOV subfolder which you can view outside the game with Windows Media Player. 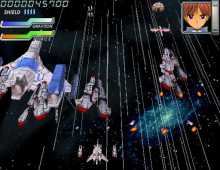